Some of the most legendary and iconic moments in the history of League of Legends have taken place at the World Championships, and soon players from 24 different teams will have an opportunity to leave their own permanent mark on the game.

The World Championship stands above all other events in the League of Legends calendar, and those who pull off an incredible play there can establish a legacy in a single moment.

Which plays are the most iconic is obviously a subjective matter, but Riot themselves recently implied their feelings on the matter by immortalizing five moments from past World Championships in the video for the 2019 orchestral theme.

The video features a collection of marble-looking statues featuring the Summoner’s Cup, in-game icons like the Baron and Elder Dragon, and real-world landmarks from Europe, where this year’s Worlds will take place, such as the Eiffel Tower and Arc de Triomphe.

What many viewers may have missed, however – especially those newer to the game – is that the various champions seen around the statues aren’t randomly chosen. Instead, each were part of an iconic play in the World Championship’s history.

Here’s a look at the plays Riot chose to honor in the orchestral theme video, and their significance to the tournaments in which they took place.

The first two characters that can be seen in the video after the view pans down over the Summoner’s Cup are Talon and Zed, who stand beneath the statue of the Baron.

While the play didn’t take place near the Baron, the two champions do represent a legendary duel between Samsung Blue’s mid-laner Bae ‘Dade’ Eo-jin and Fnatic’s mid-laner Enrique ‘xPeke’ Cedeño Martínez in the group stage of the 2014 World Championship.

Dade’s Talon appeared to have caught out xPeke’s Zed in the jungle, but an incredible outplay for the Fnatic mid-laner saw xPeke secure the 1v1 kill, surviving with just a tiny portion of health.

In Season 4, Dade was considered one of the best mid-laners in the world, one of the only players to be held up as a potential rival to Lee ‘Faker’ Sang-hyeok, who had been dominating the game since his ascent in 2013.

xPeke’s outplay acted as a statement, reminding the world that the Fnatic legend could still go toe-to-toe with some of South Korea’s best, even as the region was consolidating its status as the world-beaters they would remain for several years to come.

Unfortunately, despite xPeke’s play, Fnatic weren’t able to close out the game and were ultimately eliminated in the group stage. Samsung Blue went on to reach the semi-finals where they lost to Samsung White, who ultimately won the tournament in dominant fashion. 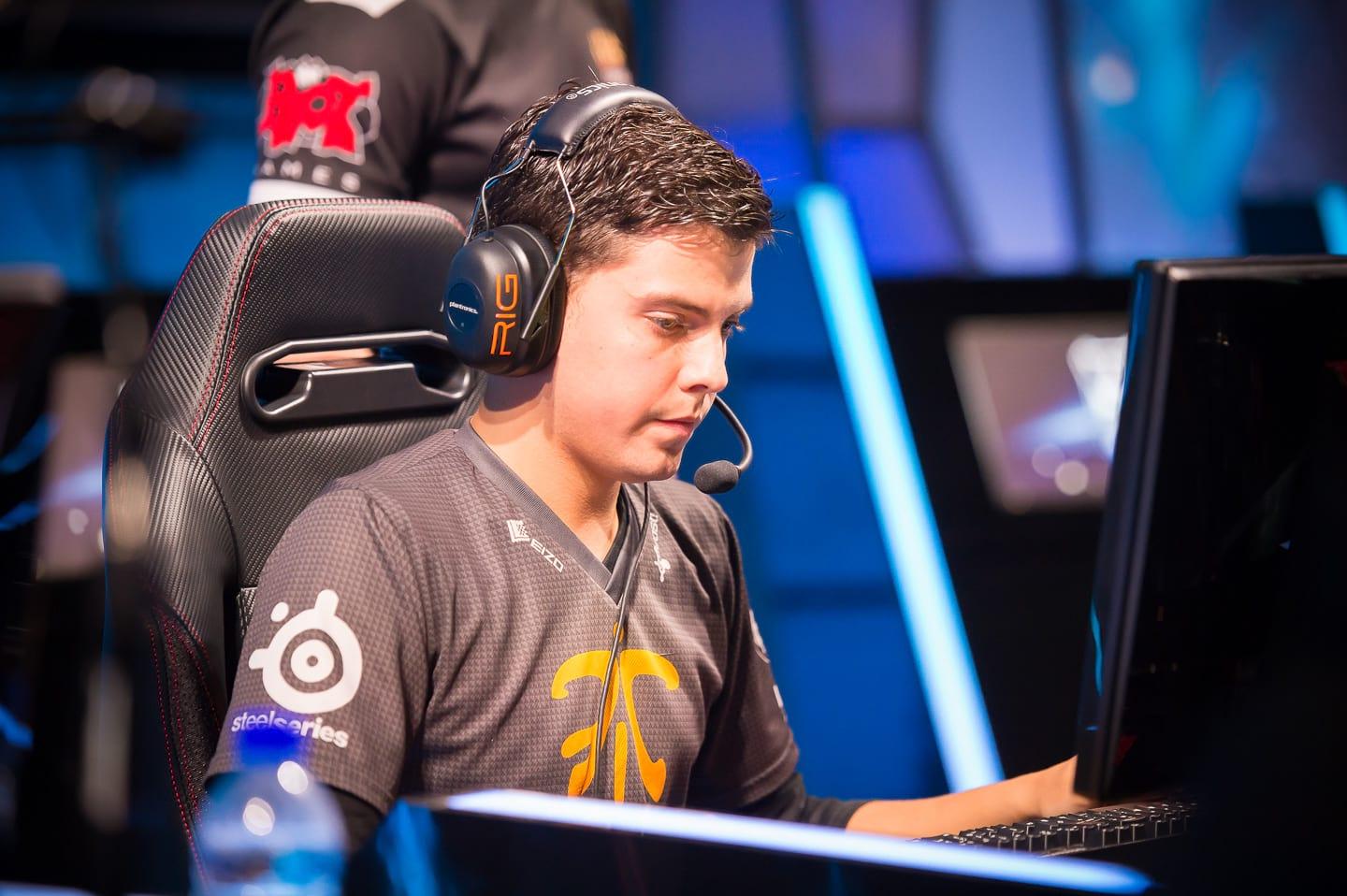 xPeke is responsible for several of League of Legends’ earliest iconic plays.

Next up, the camera jumps to the Elder Dragon statue on the opposite side, revealing Varus taking aim at a fleeing Karma.

This pair represent the deciding play of the 2017 World Championship final between Samsung Galaxy and SK Telecom T1, when Park ‘Ruler’ Jae-hyuk flashed forward on Varus to land his ultimate on Faker’s Karma, resulting in a kill that snowballed into the match-winning push for Samsung.

That role should have been played by LCK Summer champions Longzhu, but Samsung dismantled them in the quarter-finals to advance in their place. While SKT had scraped through two five-game series to reach the final, in the battle for the trophy it was clear which side was stronger, and Ruler’s catch on Faker was the play that sealed the 3-0 sweep for Samsung. 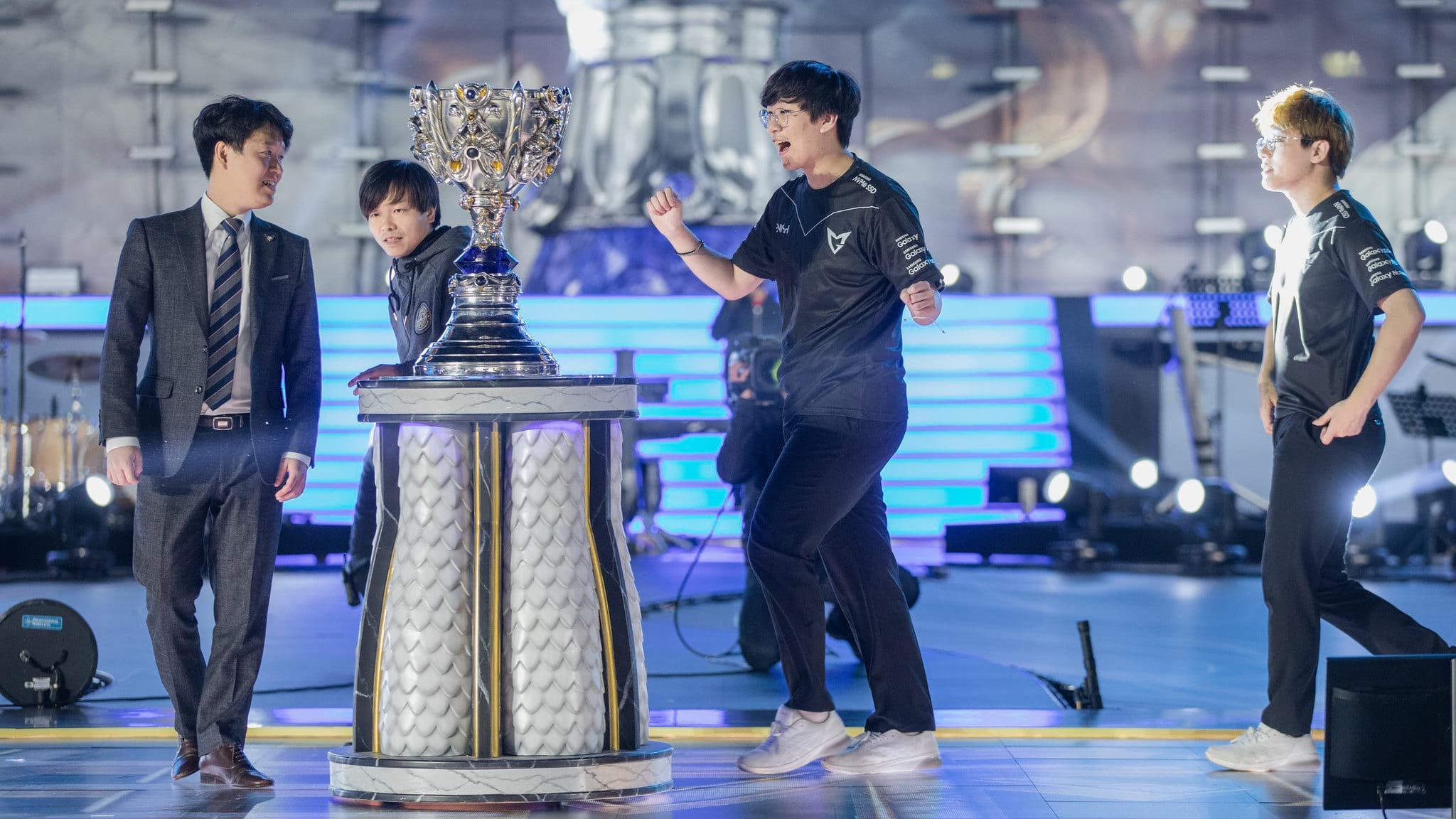 Ruler’s Varus play put the final nail in SKT’s coffin in the 2017 final.

The next champion seen is Kennen surrounded by several champions, which pays homage to a defining play of the group stage at the 2016 World Championship.

As the match between G2 Esports and ROX Tigers moved into the late-game, it was G2 who had the advantage, up in gold, kills, towers, and dragons.

As the Europeans looked for a potentially game-winning engage in the mid-lane, however, Song ‘Smeb’ Kyung-ho – then considered not only the best top-laner, but perhaps the best player in the world, ranked number one on Riot’s top-20 list – turned the play with an incredible Kennen ultimate to help his team secure the ace.

The game was a crucial one for both teams. G2 Esports were struggling in the group, while Albus Nox Luna were in the process of one of the biggest underdog runs in the event’s history. Even ROX, one of the tournament favorites, were in danger of losing the top spot in the group.

If G2 had been able to close out the game, they might have kept their playoff hopes alive at least a little longer, and ROX might have found themselves playing tiebreakers to even escape the group, rather than to take the top seed. Smeb’s play may well have changed the entire course of the tournament. 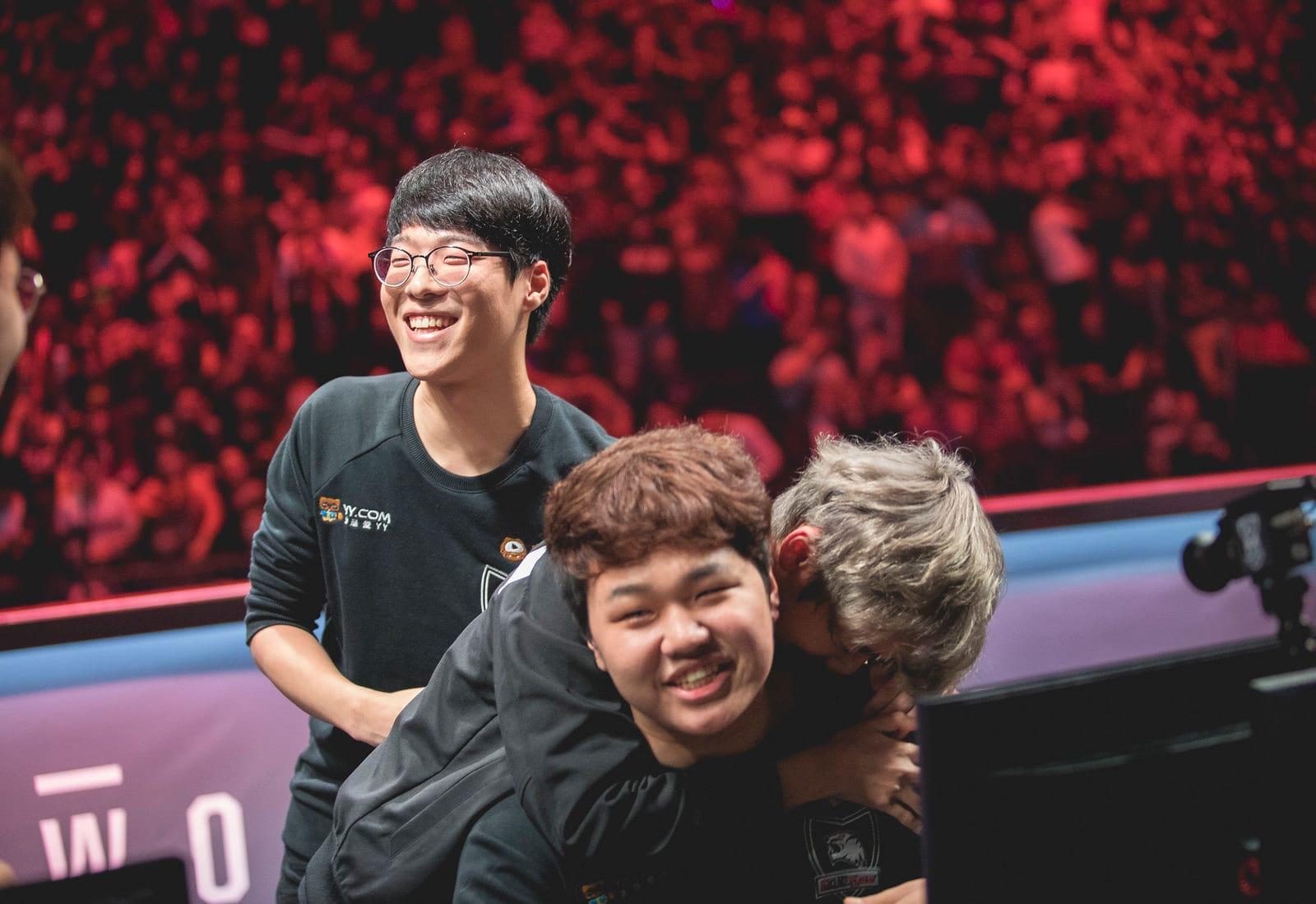 Both PraY and Smeb made iconic plays at the 2016 World Championship.

On the Baron platform stands Ashe, bow drawn back, while on the opposite side Ekko stands on the Elder Dragon, their separation representing the distance of Kim ‘PraY’ Jong-in’s legendary Ashe arrow.

In game two of the semi-final between ROX and SKT, PraY and team-mate Lee ‘Kuro’ Seo-haeng were pushing in the top lane when SK Telecom T1 tried to respond with an attack of their own, picking up ‘Peanut’ in the bottom lane and skirmishing in mid.

While the teams traded kills, the fights bought time for PraY and Kuro to keep pushing, working their way onto the nexus towers. As SKT top-laner Lee ‘Duke’ Ho-seong, playing Ekko, attempted to teleport back to base to defend, PraY fired off an arrow that travelled all the way across the map, denying the teleport and delaying enough that ROX were able to finish the game then and there.

ROX and SKT were the two big favorites for the 2016 World Championship, having traded domestic titles during the LCK season. The series ultimately went all the way to five maps, but it was SKT who closed it out, and went on to become the first team to ever win Worlds in back-to-back years.

The most recent play is appropriately shown last, with Aatrox stood elevated above four other champions, representing the incredible 1v4 engage that Invictus top-laner Kang ‘TheShy’ Seung-lok pulled off against G2 Esports in the 2018 semi-finals.

Invictus were looking to close out a sweep in the third game of the series, but after 20 minutes of play both teams were evenly matched. As both teams looked towards the Infernal drake, it was iG who were able to secure it, but the ensuing fight opened in G2’s favor with a quick kill onto Gao ‘Ning’ Zhen-Ning .

The LPL team looked set to disengage, but TheShy had different ideas, moving forward alone while his team backed off and hitting a massive four-man strike with the Darkin Blade, dealing massive damage and allowing his team to come back in and clean up, which ultimately proved a turning point in the match.

G2 might not have been one of the favorites for the tournament, but they’d already eliminated Royal Never Give Up, for whom the World Championship was supposed to be the crowning moment of an otherwise dominant year.

Instead, it was Invictus who advanced and eventually claimed the first World Championship for China, and their success came off the back of solo-laners Song ‘Rookie’ Eui-jin and TheShy, with the latter establishing himself as the best top-laner in the world with incredible plays like this in his international debut.