Twitch streamer and esports pro Rumay ‘Hafu’ Wang has explained why it means so much to her to be recognized as the number one player in League of Legends’ Teamfight Tactics.

Teamfight Tactics is Riot Games’ take on the autobattler genre which was popularized by Auto Chess, and players on the League of Legends Public Beta Environment (PBE) have been able to try out the game since June 18.

Hafu is a streamer and pro player with experience competing at the top in World of Warcraft arena, most notably claiming two MLG titles, and is now best known for her skill in Hearthstone.

As Teamfight Tactics came to an end on the PBE ahead of its full release, Riot Games revealed the hidden rankings of the top game’s top players so far, which showed that Hafu had the highest MMR of any player. 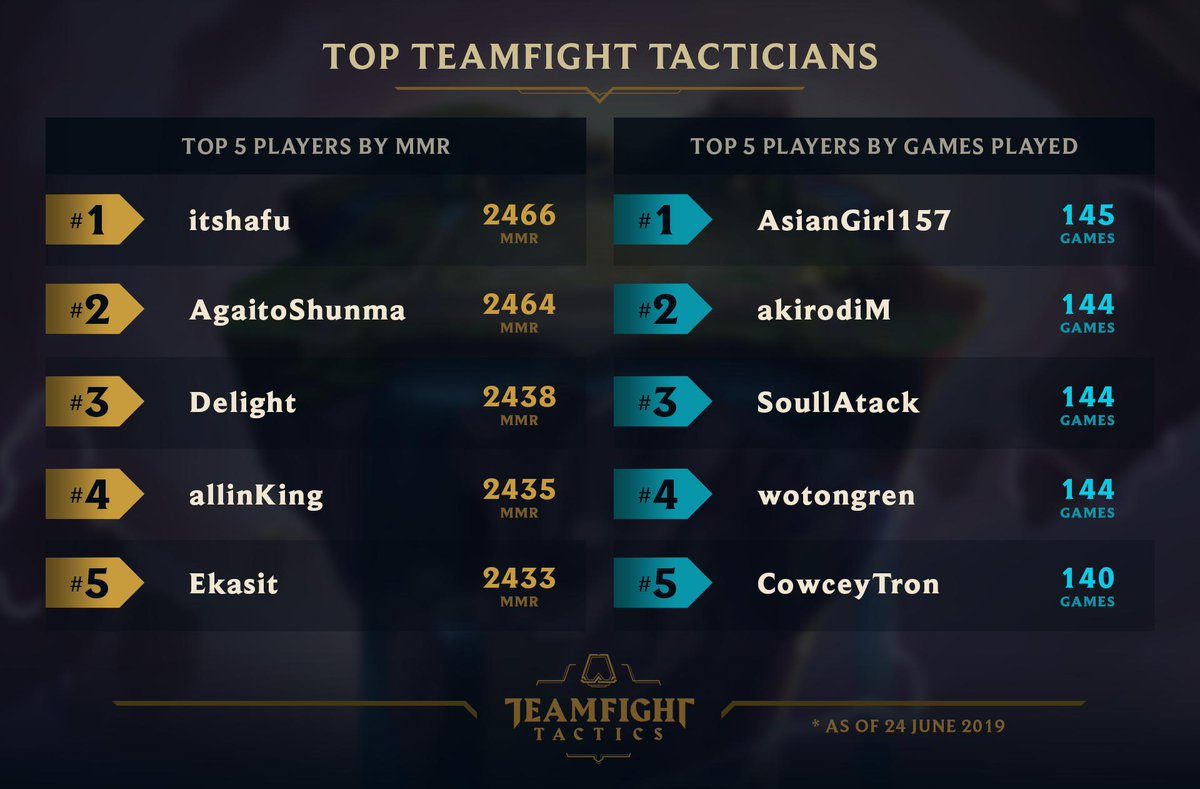 The top-ranked Teamfight Tactics players during the PBE.

In the wake of the rankings being revealed, Hafu took a moment on stream to express how much it means to her to be recognized for her skill.

“It’s kind of hard for girls to get respect in gaming in general, and I’ve always had my accomplishments kind of squandered. Like when I won tournaments, people would say ‘oh you got carried’ or whatever – two different games, with multiple tournaments! And it always felt so bad, people are just never giving me any credit.”

Hafu also revealed that this isn’t the first time she’s achieved a notable ranking in a game, but the previous time she didn’t get any recognition for it.

When she was streaming Hearthstone, she states that Blizzard checked the rankings and informed her that she was ranked 8 in the arena, significantly higher than popular players like Octavian ‘Kripparrian’ Morosan and Jeffrey ‘Trump’ Shih, but wouldn’t make the information public, despite Hafu feeling that many viewers unfairly considered her to be an inferior player.

“Blizzard went and checked at the headquarters, and they’re like ‘oh yeah, you’re actually 8th’. And Kripp and Trump were like 400th and 1000th, and they wouldn’t post it, and they wouldn’t tell anyone! And for the longest time everyone thought I was just worse than them.”

With Teamfight Tactics launching in North America on June 26, Hafu will undoubtedly look to defend her position as the game’s top-ranked player.

Despite essentially being an entirely new game, Teamfight Tactics can be played from the League of Legends client as a mode, rather than requiring a different account or launcher.