In a tweet posted to Nadeshot’s Twitter account, the hackers included a screenshot of the former OpTic star’s PlayStation Network profile screen, with the options on the left hand such as “set online status” confirming that they are logged into the account.

Included in the tweet is a statement which reads “follow us, you dig?” asking Haag to follow them, likely in exchange for the return of his accounts. 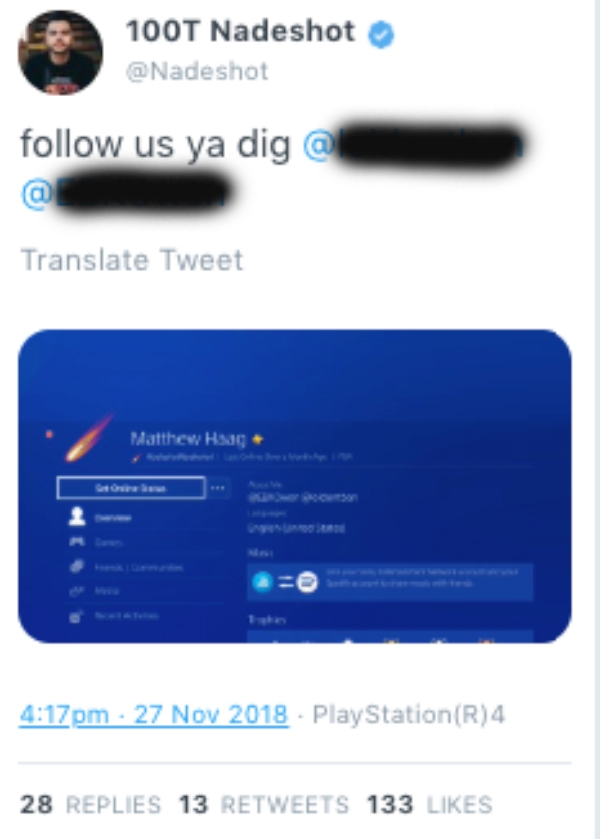 The tweet posted by the hackers who took control of Nadeshot’s accounts.

Nadeshot isn’t the only esports personality to be affected by this group of hackers. FaZe Clan’s professional Call of Duty player Dillon ‘Attach’ Price also had his PSN account hacked on Friday, November 23.

The hackers then reset his Call of Duty account, meaning that Price lost his account that had just reached Master Prestige on Call of Duty: Black Ops 4.

The hackers who have taken control of Nadeshot’s accounts have been breaking into accounts on a regular basis, including those belonging to FaZe Clan members Agony and Testyment.

It also appears that the hackers have gained access to accounts belonging to YouTuber Bryan ‘RiceGum’ Le and popular rapper Travis Scott using this method.

Nadeshot has yet to respond to his hacking, but we will be sure to keep updating as new information becomes available.