The trailer for “I Love You, Colonel Sanders! A Finger Lickin’ Good Dating Simulator” has been released and not only does it look mind-bogglingly bizarre, it actually has some charm to it.

With an anime theme, the trailer comes across as the intro to a show than something intended as a game. 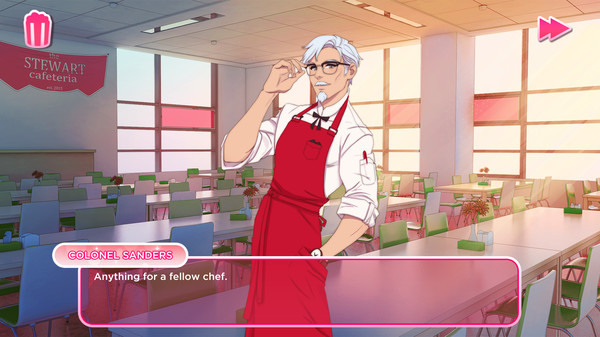 You can date Colonel Sanders in an upcoming KFC video game.
600[ad name=”article2″]

According to the Psyop-developed game’s Steam page, you play as “a promising culinary student, as you try to date your classmate, Colonel Sanders. Throughout your journey, you’ll be faced with life-changing decisions that will affect your chances of friendship and love. But be careful! Your choices have real consequences with real animated characters’ feelings at stake.”

It goes on to state that the game features 9 characters, secret endings, cooking battles and “multiple hours of play-through” implying that this isn’t just some joke game.

They go on to say that the game is officially created by KFC. Which is actually the case as KFC’s Gaming Twitter account RT’d a user who posted about finding the title on Steam.

Further confirming the legitimacy, a KFC representative told Polygon that the game is free and will be released on September 24.

You and The Colonel…

Went on a first date… to KFC…

In 2018, Psyop developed and published “Camp W”, a visual novel style title about a witch attending a summer camp in the human world.

With more and more fast food companies appealing to gamers and internet culture, it was only a matter of time until one went all-out and this seems to be it. 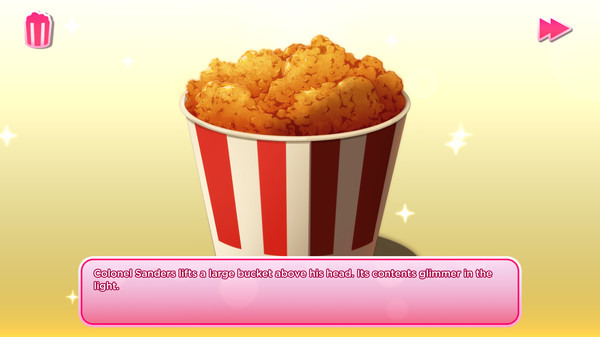 The Wendy’s Twitter account first started attracting notable attention when the account’s admin began replying to questions such as who she mains in Overwatch.  Since then, others have attempted to inch closer to nerd culture.

Earlier this year, FaZe Clan announced a partnership with Burger King to launch the Impossible Whopper.

What are Aux Powers in Pokemon Legends Arceus?