When Does Fortnite Season 5 Start and Season 4 End? Everything You Need to Know - Dexerto
Fortnite

When Does Fortnite Season 5 Start and Season 4 End? Everything You Need to Know

Fortnite Season 5 will launch on Thursday 12 July. This means that there’s not long for fans to enjoy the final moments of Season 4, which began with a meteor crash in May.

The meteors altered the map as a new superhero theme was introduced, but it’s all set to change again. Here’s everything we know about Fortnite Season 5 so far.

That heroes and villains theme has never been fully by Epic Games but players finally started to get some answers when the rocket in the villain’s base launched on June 30 and mysterious cracks and portals started to appear around the map and in the sky.

When does Season 4 end?

Season 4, which has been extended by two days, will officially end on Wednesday, July 11.

When will Season 5 begin? 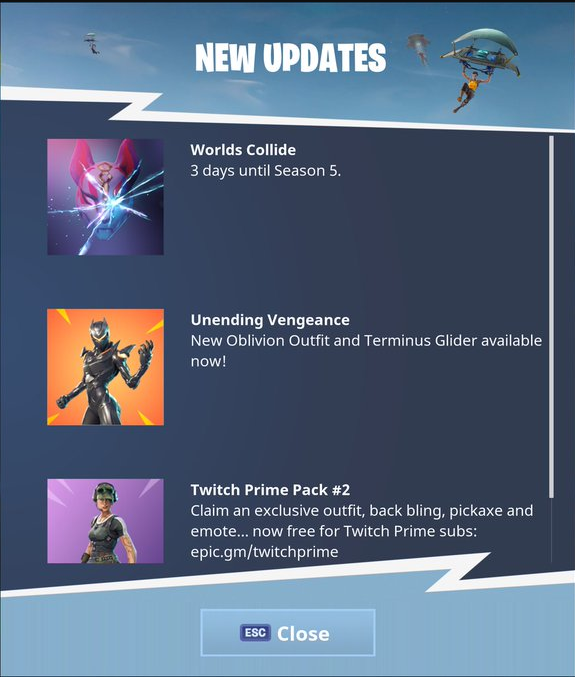 The in-game updates message confirmed that Season 5 begins in “3 days” on July 9th.

What can you expect from the Season 5 Battle Pass?

If previous seasons are anything to go by, the Season 5 Battle Pass will cost a total of 950 V-Bucks (approximately $10).

The Battle Pass will give you the opportunity to unlock a variety of skins, items, emotes, and other cool cosmetics as you level up and earn XP.

What major changes will we see to the map and game for Season 5?

It seems inevitable that Fortnite’s map will undergo a major overhaul as we switch from Season 4 to Season 5, with numerous hints and cryptic clues being discovered on a daily basis.

The appearance of strange portals or rifts all around the map coupled with the disappearance of signs, landmarks, and other places of interest certainly seem to suggest that this will be the biggest change we have ever seen.

Speculation ranges from time travel to more missile strikes, and from an alien invasion to some sort of post-apocalyptic world. Nothing is confirmed yet but the rocket launch was undoubtedly the start of something big.

One area of the map that everyone is convinced will change is Wailing Woods, though nobody seems to be quite sure what it will become. Recent leaks also suggest that the entire map could undergo a massive makeover and feature a desert theme for all of Season 5 with completely revamped places of interest.

In terms of gameplay, don’t expect Epic Games to mess with its winning formula too much, but don’t be surprised to see a host of new items, weapons, consumables, and more released with, or shortly after, the Season 5 update.

How long will Season 5 last?

Expect to see another 10 week season for Fortnite Battle Royale Season 5. The time span gives players ample opportunity to earn all of Battle Pass items and the cycle seems to work perfectly.

Epic tends to start releasing hints about the next season just as interest in the current one is beginning to die down so players are on their toes at just about all times and anticipation for what will come next is always high.