Weapons Skins Could Be Coming to Fortnite Battle Royale

A new leak suggests that weapon skins could be making their way to Fortnite Battle Royale in a future update.

The leaked folder suggests that players may be able to select different skins and camos for their weapons in the future, giving Fortnite fans a new level of customisation. 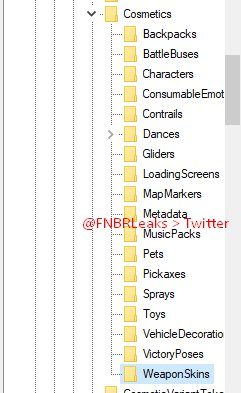 Skins for weapons is a feature that has long been called for by Fortnite fans, and the possibility that this could become reality will surely be exciting to dedicated fans of the game.

There’s no information regarding how fans will be able to get their hands on the new weapons skins if they are released. While some skins may be available by unlocking them through the Battle Pass, it’s also likely that they will be available to purchase through the in-game Item Shop.

With the V5.40 update going live on Thursday, September 6, dataminers have already began searching for information on what might be coming to Fortnite in the near future. New character skins, harvesting tools and gliders have already been found, with more leaks likely to appear..

Fortnite’s V5.40 update features the new High Stakes event, along with the new Grappler item and the Getaway Limited Time Mode, and is live right now.

When is Metroid Prime 4 coming out? Release date, trailer & everything we know