New Limited Time Modes titled ‘Score Royale’ and ‘Final Fight’ may be coming to Fortnite: Battle Royale after new information was made available via datamining.

With new updates and patching coming almost every week, fans and players around the world have expressed their enjoyment with Epic Games for being able to keep Fortnite fresh since its release in 2017.

Not many games have been able to mirror the success of Fortnite, which has successfully broken into mainstream culture with millions of players from various backgrounds trying their luck at obtaining a ‘Victory Royale’ on a daily basis.

However, Epic Games, the developer of Fortnite, typically attempt to keep some future additions under wraps prior to their in-game launch, yet some community members are able to find descriptions and names of items, modes, and much more prior to release.

On Monday, June 11th, FNBR Leaks, an account dedicated to datamining the Battle Royale game, revealed that two new Limited Time Modes were found in the game files following a recent update, and will potentially be coming to Fortnite in the future.

The two possible LTM’s can be found below, with it still being unconfirmed at the time of writing whether or not they will be coming to Fortnite.

“A brand new take on earning a Victory Royale. This mode rewards players who like to explore and search for loot. Earn points by opening loot containers, using foraged items and eliminating other players. The first player to pass the High Score threshold wins!“ 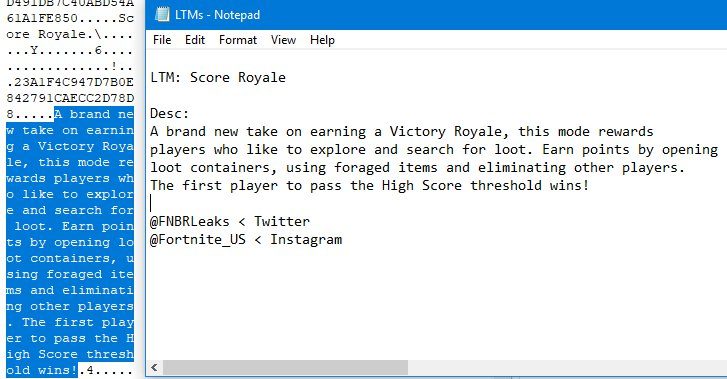 Make it to the final circle and then fight for the Victory Royale! 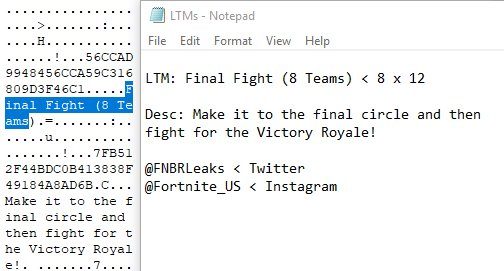