Shotguns have been at the center of many discussions among Fortnite’s vast player-base for a long time.

One of the main issues that many have had with shotguns is how inconsistent they can be when dealing damage.

OpTic Gaming content creator Jack ‘CouRage’ Dunlop, who is an avid player of Fortnite, has proposed an idea on how to improve shotguns.

He posted the basics of his proposal on Twitter, with the message “let’s end the single digit shotgun damage together.” 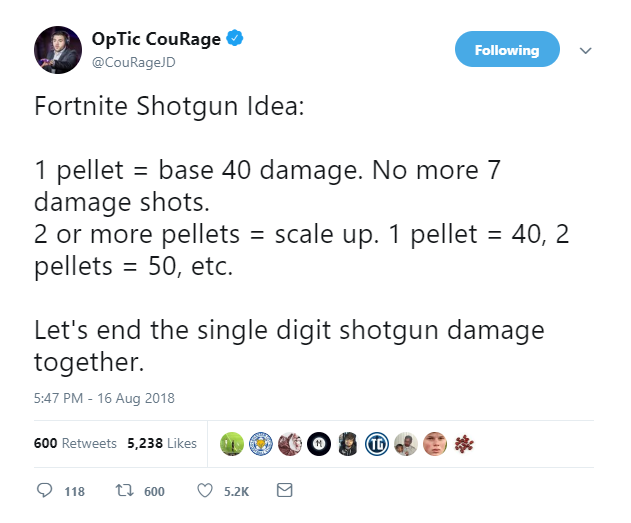 This idea would, in effect, get rid of any possibility of a shotgun dealing single digit damage, since the minimum damage would be set at 40.

Furthermore, this would also reward more accurate shots, as each additional pellet that makes contact would deal 10 more damage.

While this idea, if implemented, might not solve all of the problems and issues with shotguns in Fortnite, it would certainly address of the main ones.

In their current state, with the inconsistent damage and delays when switching, shotguns are not being used as much as in prior seasons, with players preferring the SMGs and Drum Gun for close engagements.

Twitch streamer rages after chat pranks him with classic joke