In-game footage of Fortnite’s newly leaked Heavy Assault Rifle has surfaced, and it shows that the new weapon is devastatingly overpowered.

Two new weapons were leaked to be coming soon in Fortnite following the recently-released v11.20 update – the Heavy Assault Rifle and its longer-ranged counterpart Scoped AR.

Resembling the AK-47 in both its appearance and function, the Heavy AR has been in Fortnite before, debuting in Season 6 before being removed at the start of Chapter 2.

The gun was never considered to be overpowered, hence why it was never vaulted. However, the leaked Chapter 2 version could play a totally different tune, especially since leaks indicate that there will both Epic and Legendary variants.

Here is some leaked in-game footage of the Heavy AR being used in Fortnite’s Creative mode, courtesy of prominent data-miner HYPEX.

Here's the Leaked Legendary AK's gameplay! (Thanks to @TKroggyOfficial For inviting me to his island to try it.)

According to the clip above, the damage profile of the Epic/Legendary versions will be 44/46 to the body and 88/92 to the head, the latter stat being startlingly high.

The ending demonstration in the video shows how devastating this can be, as a player with both full health and shields gets obliterated in just 3-4 bullets.

Added to the fact that the gun is agile and versatile enough to be used at both medium and close-range gunfights, it would more than likely quickly become the most powerful assault rifle in the game, and completely alter the competitive meta. 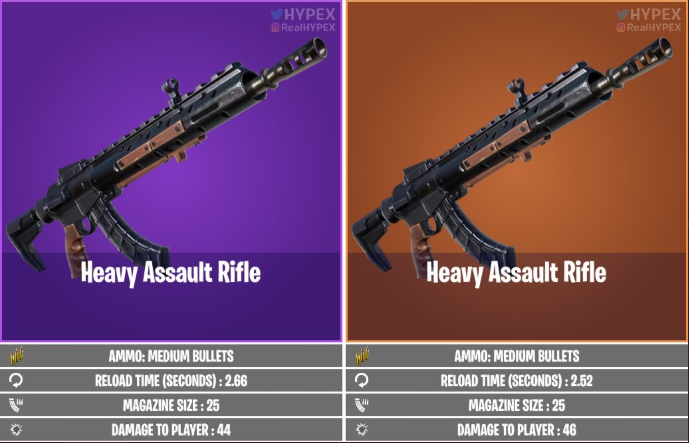 Leaked stats and images of the new Heavy AR in Fortnite.

When will the new Heavy AR be added in Fortnite?

As with every leaked weapon and item, there’s no telling when or even if they will be added into the game.

It’s likely that one of the two guns leaked in the v11.20 update will get added at some point in the near future, but it’s highly improbable that it would be both.

There are already two different assault rifle types in the game – the regular and burst – so adding two more seems very unlikely, especially with how much emphasis Epic put on limiting the weapon pool at the start of Chapter 2.