Fortnite’s Meowscles’ Mischief challenges are now live, and one of the week’s most difficult tasks wants you to visit Coral Cove, Stack Shack, and Crash Site without swimming through any water in one single match.

As always, Epic Games have released 10 more challenges for players to sink their teeth into during Fortnite Season 2, with special agent Meowscles from the Battle Pass the focus for the next two weeks, much like TNTina before them.

Some of the feline fighter’s challenges are easier than others, but perhaps the most difficult this week sees players tasked with visiting Coral Cove, Stack Shack, and Crash Site in a single match. What makes the challenge even tougher though, is the fact that you won’t be able to dip your toes into any water while attempting it.

Starting this challenge may prove to be the most difficult part, as none of these locations are marked on the map as points of interest, forcing you to rely on your knowledge and hope you know what these names refer to.

For those struggling though, we’ve found all three locations, ensuring everyone knows exactly where they need to go when they decide to take on this task. First off, Coral Cove can be found on the edge of the cluster of islands in the north-west of the map, with a campfire surrounded by buildings using massive shells as roofs.

Coral Cove features a number of buildings with massive shells.

Stack Shack is much trickier to find, as it’s a simple yellow building on an island off the coast of Holly Hedges, with no discernable features to make it stand out.

Stack Shack is a difficult spot to find.

Finally, the Crash Site can be found on the large island directly west of Pleasant Park, where an airplane has clearly plummeted into the earth and broken in half, leaving wreckage in its wake.

If finding these places is proving difficult, we have marked all three on the map below. 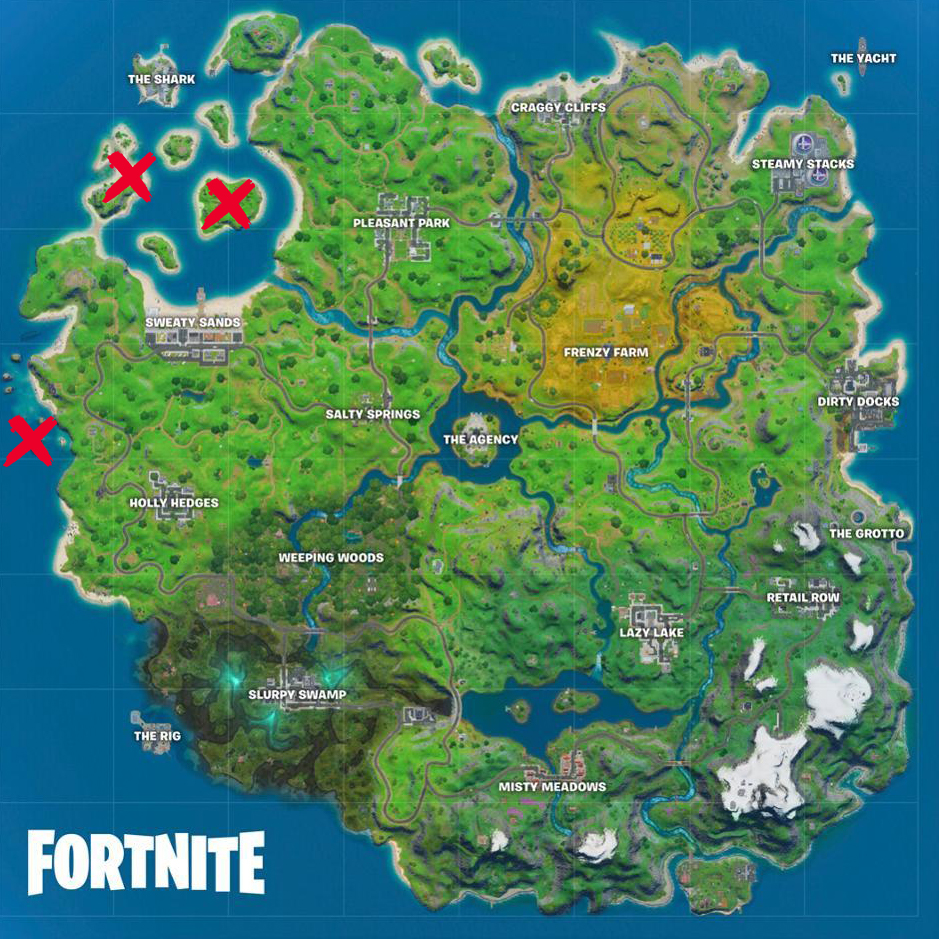 Map showing the three locations for this challenge.

How to visit Coral Cove, Stack Shack, and Crash Site without swimming

With all three of these locations sitting on islands, vehicles are the best and easiest way to complete this challenge. The Choppa, added in March 17’s v12.20 Update, will likely prove the quickest, as you can fly directly from one to the other, but a boat should theoretically do the same trick, although it will probably take longer and leave you more exposed.

Theoretically, you could also build to each location, however, you would need to gather a lot of materials, and this method would make you ripe for the picking by opponents.

Remember, you must visit all three in the same match, so if you don’t make it to your final stop, or the circle doesn’t permit it, you’ll need to start from scratch in your next game. For those who are also taking on the Deadpool challenges, you can also find out where to find the masked hero’s stuffed unicorn, and where to visit Steel Bridges.