There are several benefits to the newly revamped World Marker system in Fortnite Battle Royale, one of which is that it gives the ability to estimate bullet drop.

Inspired by the Ping system in Apex Legends, Epic Games made vast improvements to the World Marker system at the start of Season 8, as it now allows players to mark weapons and items on the map for their teammates to see.

It also allows enemies to be marked as well, and the distance indicator that’s part of this new system is a perfect tool for players to estimate how far their bullet is going to drop when they try to snipe the enemy.

The estimation process is pretty simple – once an enemy is marked, just aim in at them with your sniper and use the small lines on the scope to determine where to aim the crosshairs.

Since the distance of how far the enemy player is from you will be indicated on the marker, you simply have to match up the correct dash line on the scope with the shoulder level of the player. 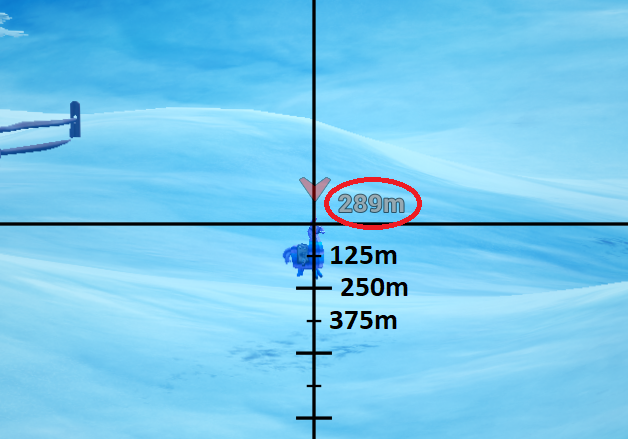 According to the image above, the first dash under the crosshairs is for 125 meters, followed by 250m and 375m for the next two.

So, for example, if an enemy player is 289 meters away, you have to try and approximate the area between the 250m and 375m dashes that will match that distance and aim that at the head of the enemy.

Granted, this system is obviously neither perfect nor foolproof, as players will often times be forced to make estimates between dash lines that may not turn out to be correct.

However, what this does offer is a major improvement and buff to sniping, as there is no doubt that we will start to see more and more players start hitting more and more snipes, especially from longer distances.

This technique is especially important for the first snipe shot that players attempt when engaging an enemy, which is often the only clean chance as bullet trails will warn them that they’re getting sniped.

It will be interesting to monitor the level that this will take sniping, and whether or not Epic will have to make any more balancing adjustments down the line.