Fortnite servers down just before Star Wars event on PS4, Xbox and PC

The servers for battle royale crashed for users around the world, who are unable to login to Fortnite – with only minutes to go before a highly anticipated Star Wars event, set to unveil an exclusive scene from The Rise of Skywalker.

Fortnite and Star Wars fans have been waiting impatiently to get into the game, so that they can head down to the Risky Reels location for the exclusive first look at the new movie, releasing December 19.

However, disaster struck as the servers went down, with players unable to log in to their Epic Games accounts to access the game.

Update: Epic Games have stated that the event has been delayed until 2:10pm EST (10 minutes behind schedule).

The Fortnite X Star Wars Event is now expected to begin at 2:10 ET

We are investigating issues with login services. You may experience issues when attempting to log in or making purchases during this time.

We will provide an update when we have more information, thank you for your patience.

The event was scheduled to begin at 11am PT / 2pm EST / 7pm GMT on December 14, with players recommended to login and queue for a match 30 minutes prior, to ensure they got into a game.

Epic Games were quick to provide an update, but fans have asked that they event be delayed or repeated to ensure that everyone has a chance to see it live. 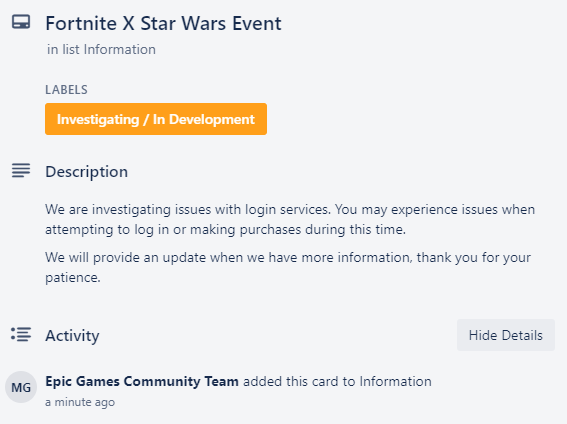 There is a lot on the line for this collaboration, the latest in a stringer of blockbuster movies crossing over with the popular battle royale game. It’s the first an exclusive scene will be shown off in-game.

The cause of the crash is unknown, although it’s possible the sharp increase in users trying to login overloaded the servers. However, some have speculated it could be another malicious attack, given the coincidental timing.

Infamous hackers Lizard Squad, who were previously responsible for another major Fortnite crash, have intimated that they could be behind this incident. It’s unclear whether they had any involvement or not.

You can keep up with everything there is to know about the event right here.