Oceania-based Fortnite pro player Jack ‘sozmann’ Lehane has criticized developers Epic Games in a series of tweets, after he was apparently banned for ‘swinging his pickaxe’.

Sozmann is a professional Fortnite player based in Australia, and so competes in the Oceania region of Epic Games competitive setup.  He was present at July’s Fortnite World Cup, competing in the solo section of the competition.

Despite qualifying numerous times – and winning the Week 9 Oceania Qualifiers outright – he placed below average in the solos competition and finished 68th overall. Regardless, he has regularly proved himself as one of the top players in the world. 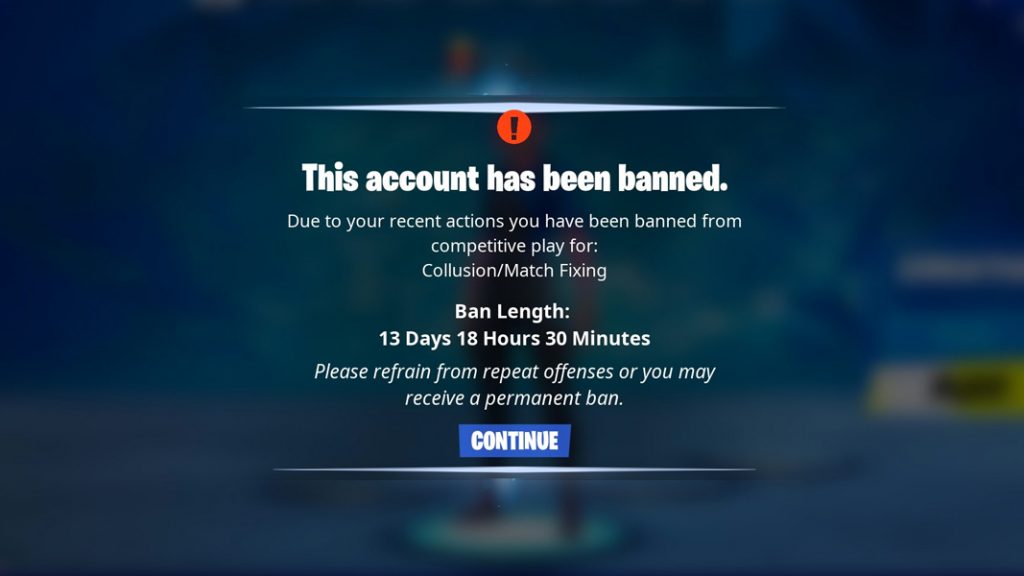 The message sozmann was greeted with.

On December 6, sozmann tweeted that he would “Never do such a thing in my life and I get hit with this hours before FCS finals.” Attached was an image of a ban on his Fortnite account.

The ban pertained to alleged “Collusion/Match Fixing”, and was scheduled to last two weeks. However, sozmann claimed that the ban was for swinging his pickaxe.

“[I’m] assuming I got a 2 weeker for pickaxe swinging but the entire community does it,” he said. “Literally top pros in videos say “pickaxe swing at me”. I got no words bro [I] would never do anything like this.”

Pickaxe swinging is used as an informal method of ‘communication’ used by many professional players, who swing their pickaxe while rotating as an indication that they are not looking for any conflict.

If players swing their pickaxe in response, it generally sees both players move on and focus on positioning and looting. However, in this case, it appears Epic interpreted it as illicit.

Despite his initial frustrations, sozmann’s ban appeared to be reversed quickly, as he tweeted: “This issue has been resolved please don’t throw negativity towards anyone affiliated with Epic [Games].”

The fact that sozmann had his ban reversed swiftly suggests it was either a mistake on Epic’s behalf, or the situation was clarified to them and they judged that the Australian had not broken any rules.

Lehane is currently competing in the ongoing Oceania Fortnite Champions Series, playing alongside players such as RepulseGod and aleccfishy.

He will be hoping to replicate the success he had in the World Cup qualifiers, in which he proved himself to be one of the very best Oceania-based players.