Fortnite leak reveals everything that drops from Junk Rift

Fortnite is debuting a new item with content update v10.10 called the Junk Rift which leaks suggest will dump objects out of it and now we have an idea of just what items will come out.

A new item called the Junk Rift has arrived in the in-game news screen, which means it won’t be long until it actually comes to the game, and fans are already wondering what it does.

According to leaker Lucas7yoshi, the item will drop objects out of it and could potentially be used to damage other players. 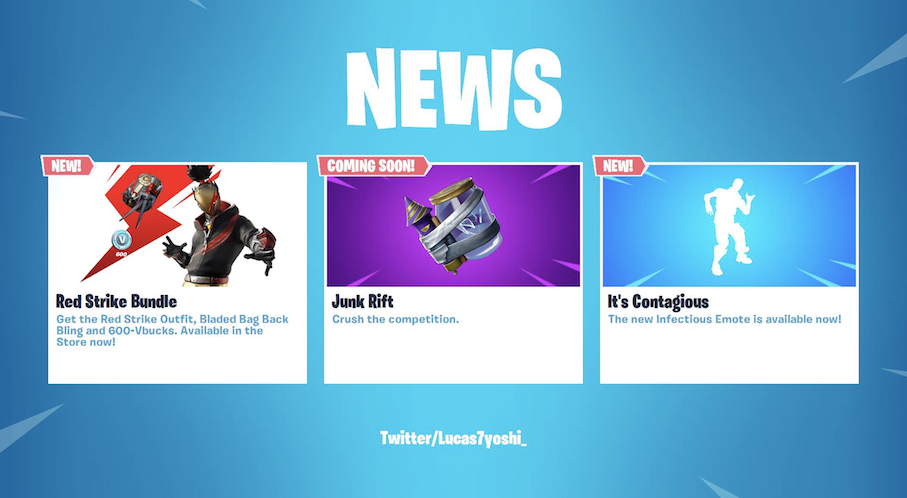 The Junk Rift is coming to Fortnite in v10.10 content update.

Fortnite leaker FireMonkey revealed four different items that could fall from the rift, but it’s not clear if that is all that can fall or if there are more.

These items include a giant dinosaur, a police car, an anchor, and an outhouse. These items have no relation to each other meaning it seems like it chooses random items.

Here are the four items you could get to fall from the sky when throwing a Junk Rift.#Fortnite #FortniteLeaks pic.twitter.com/6sEqZBrZZG

What will be interesting to keep an eye on – if these items do in fact damage others – is what the differences in damage between items will be.

Surely a giant dinosaur or cop car will do more damage to another player than an outhouse would. Both would hurt of course but the car and anchor being made of metal could mean something more.

Mechs have taken over Fortnite but the show must go on.

When is the Junk Rift coming?

The release time for this update is 8am EST (1pm BST, 5am PT, 10pm AET) on August 20 and there is no downtime, meaning you’ll be able to jump right in and use the item when it arrives.

That’s not the only thing that will be arriving with this update as we expect a couple of map changes to be in the mix.

Whatever questions we have about the Junk Rift will be answered with the new patch.