Fortnite could be getting a Capture the Flag mode, according to this leak - Dexerto
Fortnite

Fortnite could be getting a Capture the Flag mode, according to this leak

A new Fortnite Battle Royale leak claims that a new ‘Seize’ 50 vs 50 Limited Time Mode (LTM) will be coming to the game in the near future.

Limited Time Modes are one of the key features of Fortnite, providing interesting and innovative ways of playing the game that help to break up the day-to-day grind of the standard battle royale mode.

But the new ‘Seize Pack’ files, that the data mining account known as @FNLeak has leaked, could be the first evidence of a completely new LTM concept.

According to @FNLeak, ‘Seize Pack’ is also called a ‘Flag’, which suggests that the new 50 vs 50 mode will be some form of Capture the Flag (CTF): 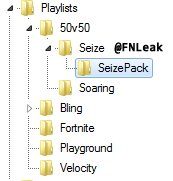 According to the data miners, there is a possibility that the mode will never see the light of day, and if it does we will probably be waiting for a few weeks as the files are currently incomplete.

“It’s possible the playlist won’t come out, and if it does it won’t be for a few weeks since the flag item appears to be only somewhat complete,” they say.

Capture the Flag is a classic gamemode in multiplayer first person shooters that usually involves taking an opponent’s flag and escaping with it back to your own base.

It would be interesting to see how such a high paced respawn gamemode would transfer over to a battle royale game. If it does end up being released, expect to see some changes to what we see in games like Call of Duty or Halo.