Fortnite player Tinny following accusations of domestic abuse from his ex-girlfriend that have since been deleted.

UPDATE: Tinny released a video on March 26 where he discussed the allegations made against him and provided evidence that refuted them.

The original claims made against the player have since been retracted and deleted by KilluaKiII.

“I immediately contacted my solicitor when this began to have these false claims removed and retracted,” he says. “My ex decided she’s done enough damage and could try to hide from the consequences of her illegal and malicious actions by deleting her defamatory tweets and saying nothing. I will continue to pursue legal action until my name is cleared.”

The allegations began on Saturday, March 9, when Twitter user KilluaKill began to tweet about her ex-boyfriend, and specifically mentioned that he was a member of FlyQuest.

In a statement released by Killua, she said that Tinny “broke her down”throughout her six-year relationship, forcing her to leave university and making sure she was isolated and financially dependent on him. The statement said that he was “disgustingly abusive, both physically and mentally,” and that reports had been made to the police.

RE: my ex. I’d recommend reconsidering who you do business with @FlyQuestSports @Swaguhsaurus @Twitch – please RT so they can’t ignore this. pic.twitter.com/tIYmjyrcbA

In the aftermath of the allegations, FlyQuest released a statement saying that they had “decided to part ways with Tinny,” following discussions between the player and the organization.

“We want to follow up in regards to the situation arising yesterday involving one of our Fortnite players,” they said. “After investigating and discussing with the player in question, we both decided it was in our best interests to part ways. We thank Tinny for his time at FlyQuest.” 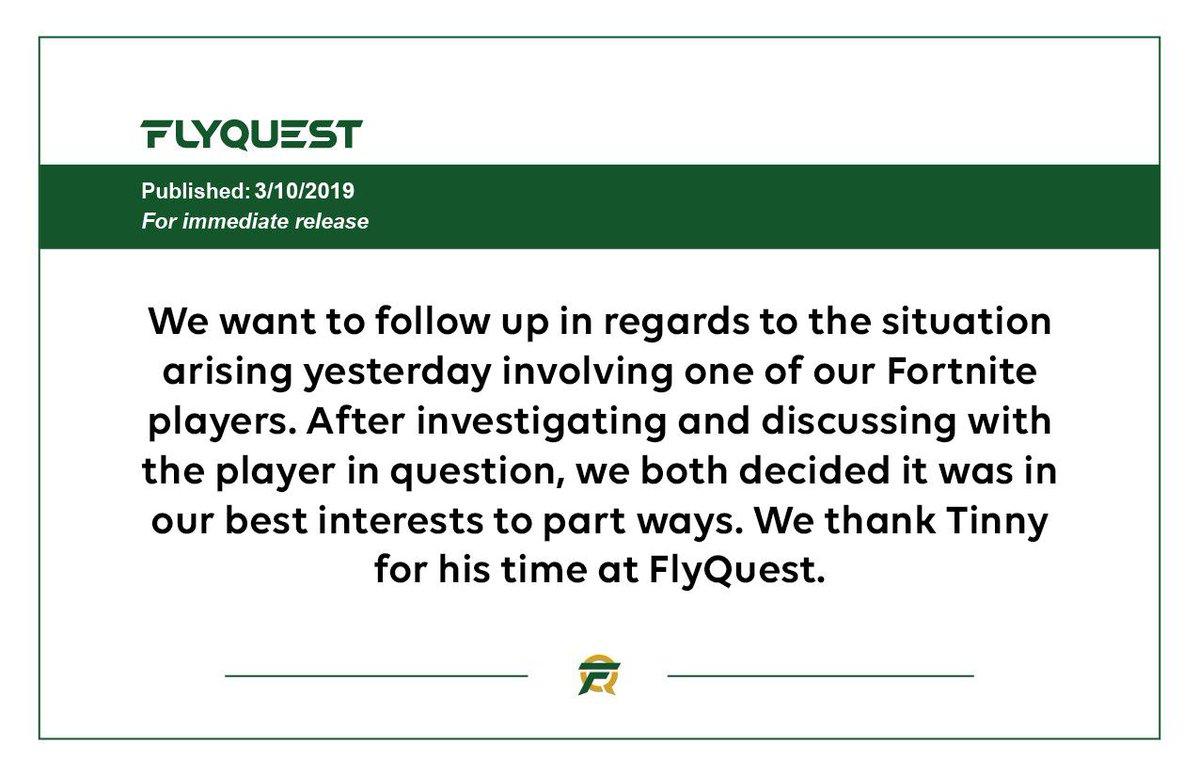 FlyQuest released a statement announcing that they had parted ways with Tinny.

In a now deleted tweet, Killua stated that her ex-boyfriend is taking legal action against her and that she is worried that, due to her lack of financial independence, she will be unable to fight against him.

She says she intends to fight the legal proceedings though, writing: “If this is going to be made into a legal matter, I know where I stand. I have enough evidence that this man could face a prison sentence. I’m going to be strong and not let him bully me into silence again.”

If this is going to be made into a a legal matter, I know where I stand. I have enough evidence that this man could face a prison sentence so I’m going to be strong and not let him bully me into silence again.

Killua claims that years of domestic abuse have left her unable to “function like a normal human or do basic things,” stating that she is a “shell of the person” that she was.