FIFA 20 was released in September, meaning the in-game market has had a chance to settle down. So now is the perfect time to share our picks for the 10 best bargains on FIFA Ultimate Team.

In order to qualify for our list, players had to have an overall rating of 82 or above, and a maximum market value of 15,000 coins. While this is a fair amount, it’s nothing compared to the value of these players on the pitch, all of whom excel in-game, and are easily affordable if a modest amount of time is invested into Division Rivals or FUT Champions.

Our prices are based off the lowest ‘Buy Now’ values available on the PS4 market, so it’s important to bear in mind that they can probably be acquired for cheaper if you’re willing to invest the time and aren’t afraid of a bidding war.

Finally, all prices are approximately correct as of the original publication of this article, but there will undoubtedly be some fluctuation as players receive special cards and the market landscape changes. Regardless, in no particular order, these are our picks for the top 10 bargains available in FIFA 20’s Ultimate Team.

Ultimate Team has been the most popular mode in FIFA for many years. 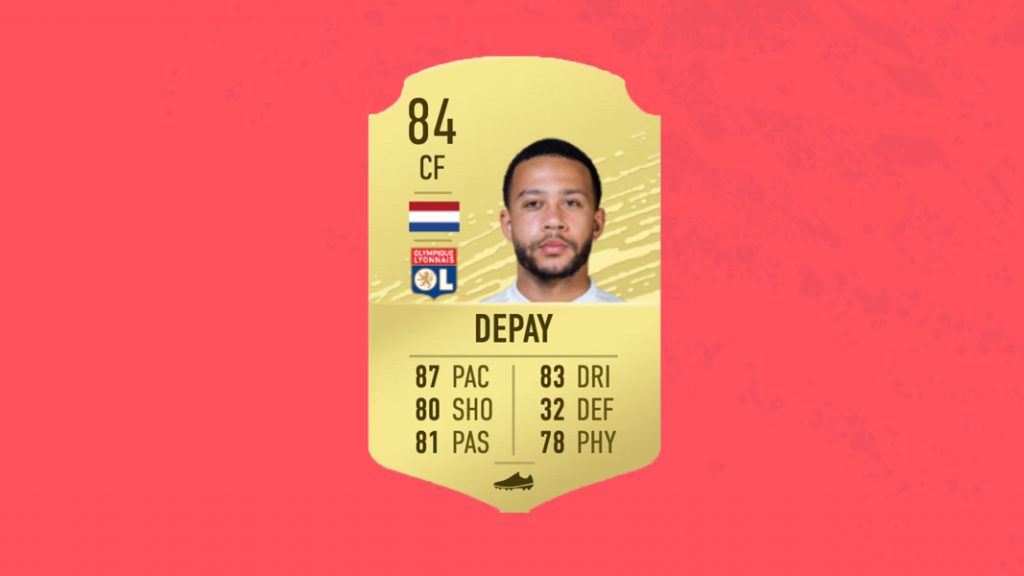 We’re kicking off our list with Memphis Depay, the 84 overall centre-forward, who plays for Olympique Lyonnais. The first thing that stands out is his pace: an impressive 87. Delve a little deeper and it’s clear that he’s an all-round excellent player, whose defending is the only stat to fall below 78.

Furthermore, his position of CF means he can be deployed as a ST or a CAM, depending on the needs of your team. 80 shooting and 81 passing means he can be equally effective in either position. Not only is he in a favorable league – the French Ligue 1 – but his Dutch nationality means he is a great candidate for hybrid squads, linking up with plenty of players from the Eredivisie and Premier League.

Finally, his 5-star skill moves supplement his already excellent ability, and means skilful players will be able to perform an array of tricks to augment his impressive offense. At roughly 4,000 coins, he is a must have in any side that can fit him. 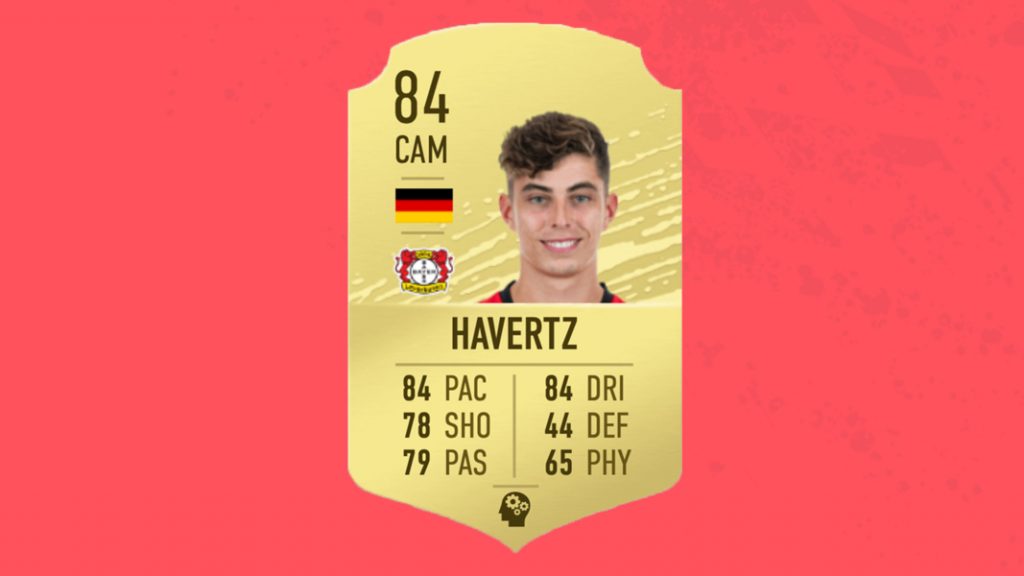 Our second pick on the list is Bayer Leverkusen’s 20-year-old wonderkid Kai Havertz. At 84 OVR, his pace and dribbling make him an ideal candidate for any Bundesliga side. He also boasts both 4-star weak foot and 4-star skill moves, meaning he can fit any play-style and will be nearly as strong on his weak foot as his preferred (left).

At just 4,500 coins, he represents a much cheaper alternative to the likes of Marco Reus (150,000 coins) or Thomas Müller (12,000 coins). Players can expect to see him improve in future FIFA games, but he already has an 86-rated in-form card in FIFA 20. Get him while he’s still affordable. 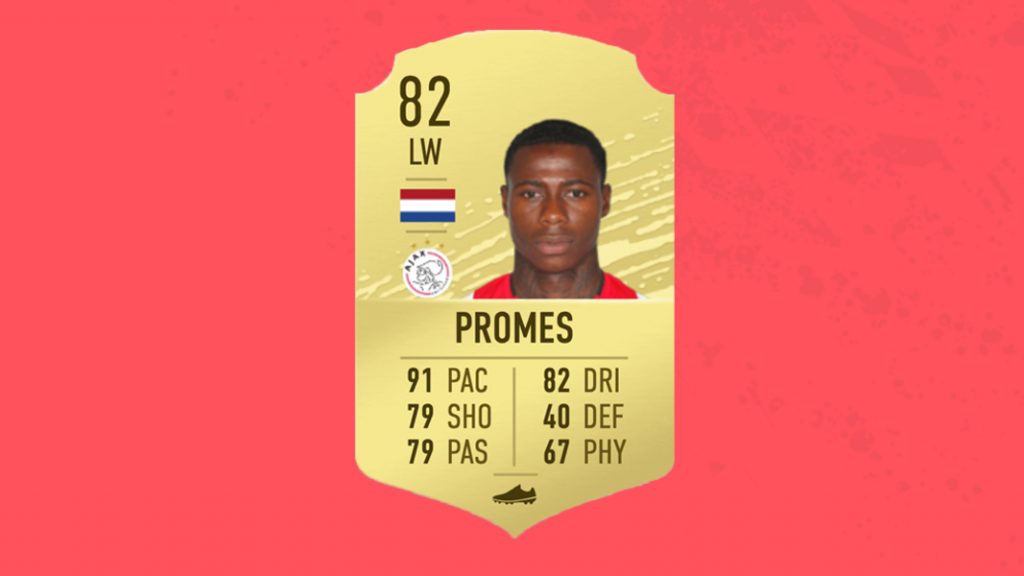 Promes is the second Dutch player on this list.

Two of Quincy Promes’ biggest strengths are his 5-star skill moves and 4-star weak foot, as they allow players to attack the outside or inside of his opposition full-back.

91 pace makes the Ajax LW a nightmare to catch for any opponent, and when you throw in 82 dribbling and 79 shooting, it’s clear that he’s an all-round offensive threat. Like Memphis Depay, his nationality makes him ideal for hybrid squads, linking up with midfielders like Georginio Wijnaldum of Liverpool or ICONs like the great Patrick Kluivert.

His versatility is a major strength, with strong passing and finishing also making him eligible as a LF or LM, depending on how you prefer to deploy him. He is also the cheapest player on this list, coming in at a staggeringly low 1,800 coins. 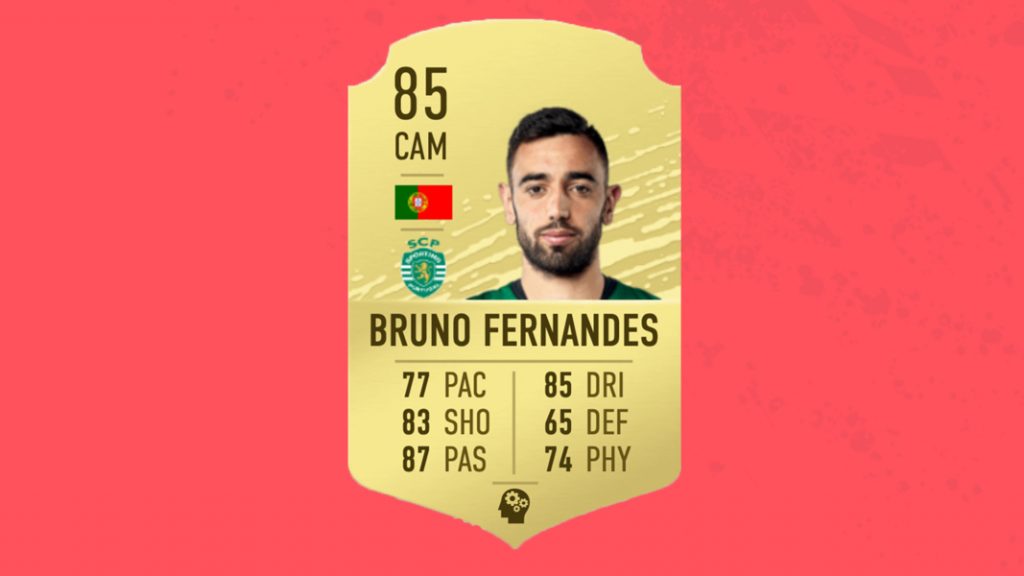 Fernandes is one of the highest OVR players on this list.

Despite being one of the highest rated players on this list, Sporting CP’s Bruno Fernandes costs a mere 7,000 coins. He is one of the slower players we’ve picked, though, with a modest 77 pace. However, playing centrally as a CAM, pace is less important, and it’s his other stats where he thrives.

83 shooting, 85 dribbling and 87 passing make him an ideal candidate for any side that can include him. He is equally adept at playing through wingers, making his own runs, or firing off long shots.

With his 4-star skill moves and 4-star weak foot, the thought of him at the centre of any team is seriously appealing. 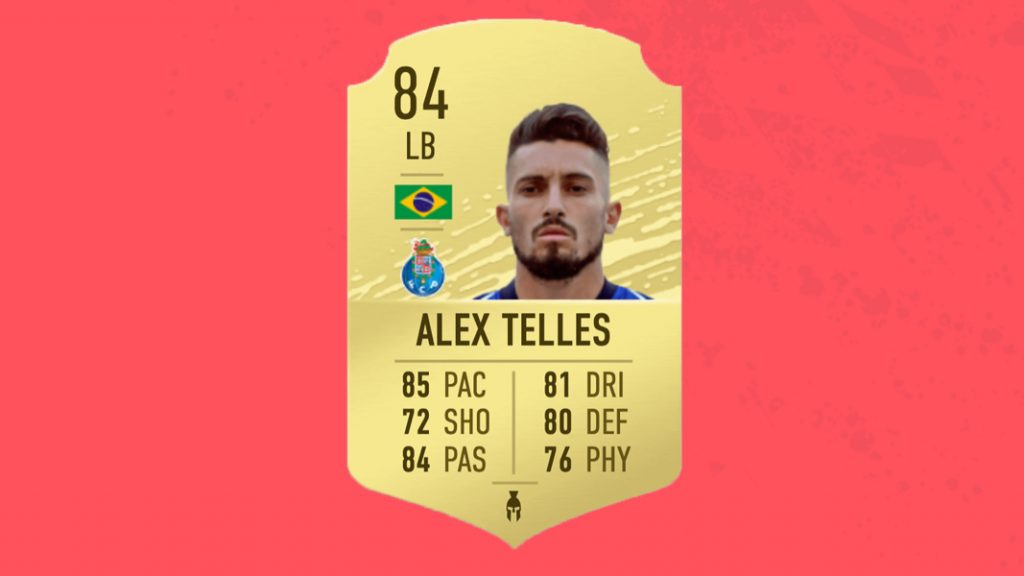 Alex Telles is the first defender on our list, but his stats show he’s equally capable of going forward as he is at stopping opposition wingers. His 85 pace means he can keep up with speedy wide players, as well as leaving opposition full-backs in his wake as he tears forward.

No stats below 72 make him an excellent all-round player, who can be deployed at LWB and even CB, where his rating remains at an impressive 79. He even retains a rating of 82 at LM, highlighting just how good he is at going forward.

Finally, despite being in a slightly less popular league – Portugal’s Liga NOS – his nationality means he can fit with more or less any hybrid squad as Brazilian players dominate world football. Examples include West Ham’s Felipe Anderson or PSG’s Marquinhos. 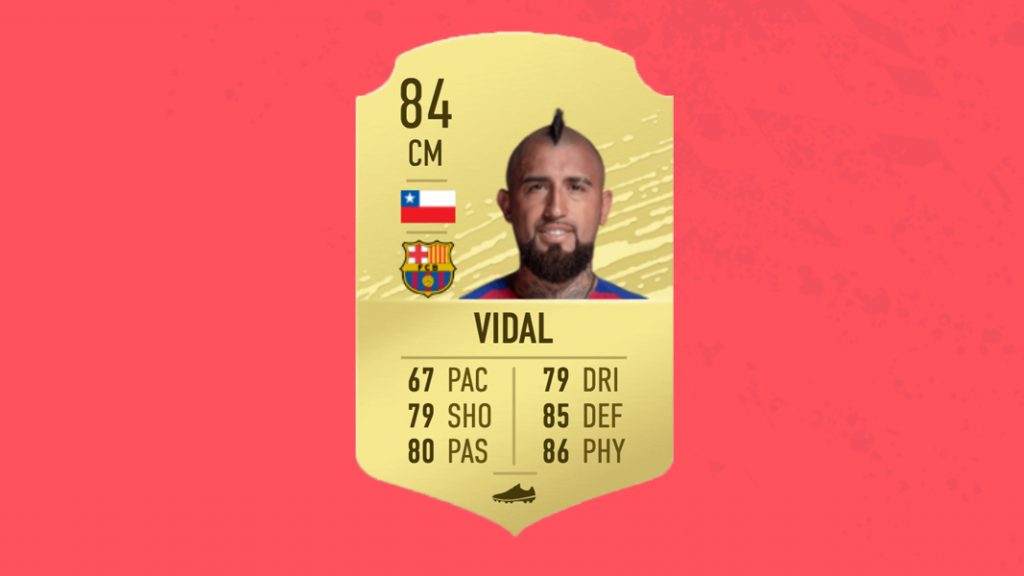 Arturo Vidal is getting older, but still 84 OVR.

One of the bigger names on this list, Arturo Vidal has been a dominant force in European football for a number of years. Playing for Barcelona, he is an excellent and affordable CM for any La Liga sides.

More geared towards defence, he is perfect to make into a CDM to anchor the gap between defence and midfield. This is reflected in his 85 defending, 86 physical and 80 passing, making him a great candidate to bully opposition forwards and start counter-attacks. 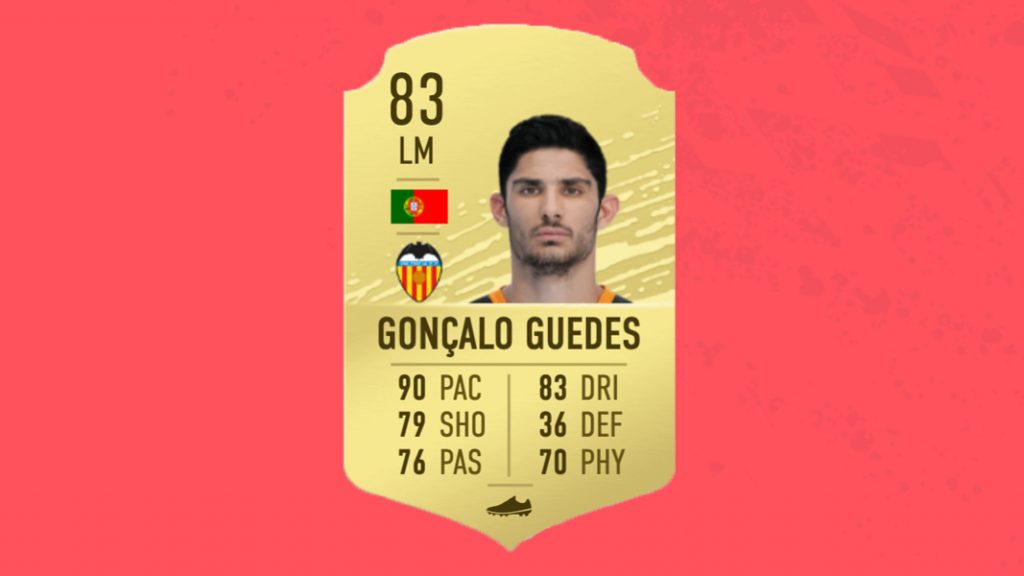 Guedes is an excellent LM choice.

A LM for Valencia, Gonçalo Guedes, is a pacy option for any La Liga squad. 90 pace and 83 dribbling make him a handful for opposition defenders, and he also boasts competent finishing and passing stats.

He is also incredibly affordable in comparison to the best LMs in his league, such as Eden Hazard (360,000 coins) or one of the many in-form cards that all come in at upwards of 15,000 coins.

Pair these stats and price with 4-star weak foot and 4-star skills moves, and his favourable nationality, and you have yourself an excellent LM at incredible value. 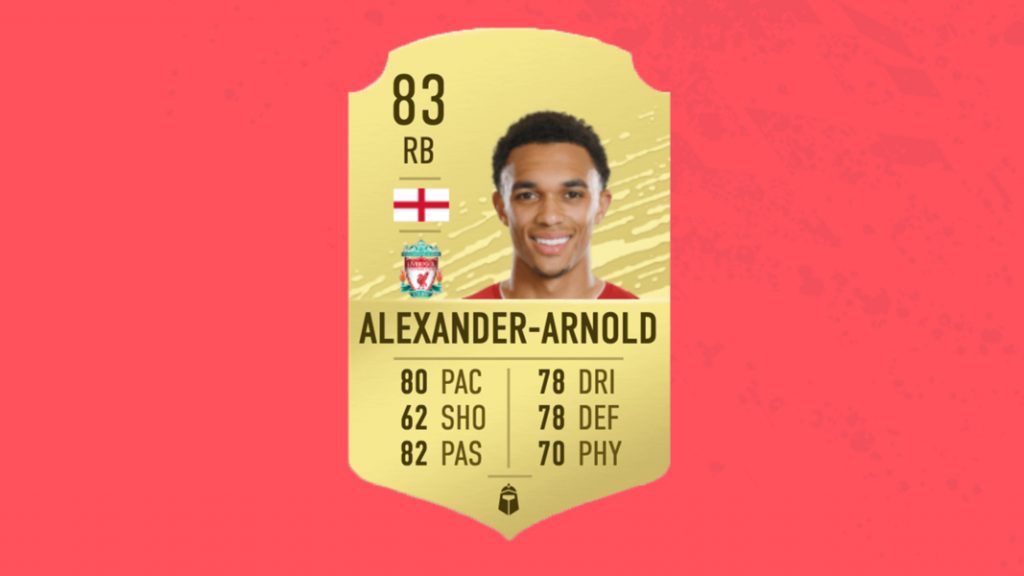 At just 21-years-old, Trent Alexander-Arnold’s ratings are only going to improve in future FIFA instalments, particularly as he stars in an incredible Liverpool side. His real-life talents are reflected in his ratings but, thankfully, not his price.

82 passing and 80 pace are his best assets, and he excels at expansive forward passing, sparking rapid attacks and then joining them himself. However, 78 defending and a modest 70 physical mean he can hold his own going backwards, too.

In the Premier League, he is the second highest rated RB, but is far cheaper than any of those around him. Kyle Walker comes in at roughly 50,000 coins. When it comes to trying to fit him in hybrid squads, we love the idea of him playing behind Jadon Sancho in a Premier League/Bundesliga XI. 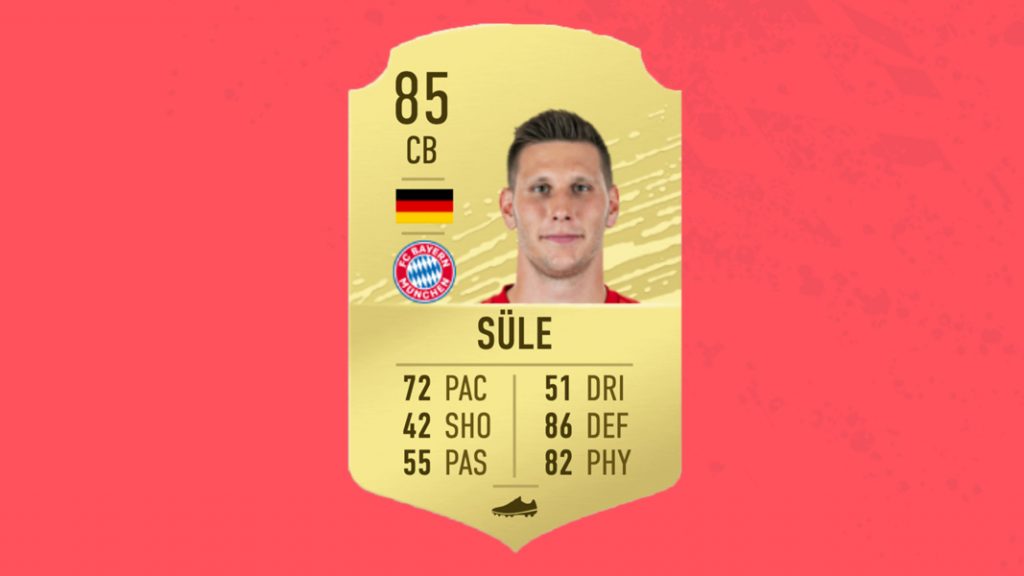 Bayern Munich’s Niklas Süle is our penultimate pick. 85 OVR, he boasts high defending and physical stats, and is a nightmare for any opposition striker to try and beat. 94 strength is seriously impressive, meaning you’re highly unlikely to ever be outmuscled by an opposition player. Also, 72 pace may sound low, but it is still fairly high for a CB.

We recommend pairing him with Kai Havertz. Not only do the pair have a strong link (sharing a league and nationality), but they complement one another in terms of relative strengths, with Süle solidifying things at the back while Havertz presses forward.

At less than 8,000 coins, Süle is a strong option to sure up any Bundesliga defence. 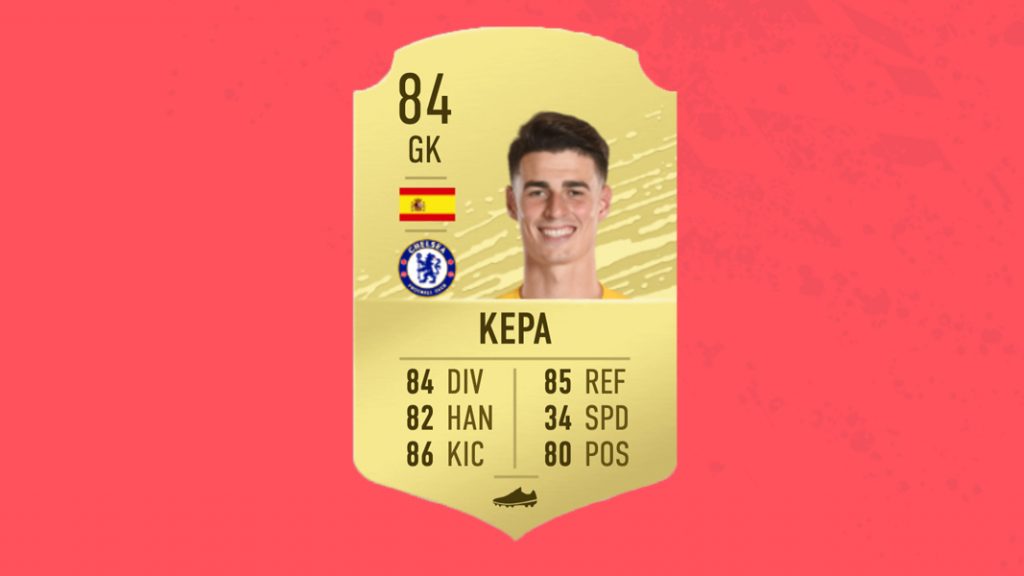 Rounding off our list is Chelsea goalkeeper Kepa Arrizabalaga. 84 OVR, he is just 25-years-old and can expect to improve in future FIFA titles. With only one attribute falling below 80, he is an excellent all-round goalkeeper.

The standouts are 84 diving and 85 reflexes, making him an excellent shot stopper. Furthermore, 86 kicking means he is capable of sparking quick counter-attacks with his goal kicks.

He is also far cheaper than the most highly-rated Premier League goalkeepers, with Alisson, De Gea and Lloris coming it at considerably higher price tags. Finally, his nationality means he is ideal to link with La Liga players, or as the backbone to a Premier League XI.

That rounds off our list for the Top 10 Bargains in FIFA 20 Ultimate Team. Who else would you include? Tweet us @UltimateTeamUK to let us know your picks!