EA SPORTS have released a special Player Moments SBC for Real Madrid/Spain midfielder Marco Asensio in FIFA 20 Ultimate Team (FUT), and we’ve got the requirements, total cost, cheapest solutions, in-game stats, and everything else you need to complete it.

Players Moments Squad Building Challenges have become a staple of FIFA 20 Ultimate Team, celebrating a special moment in a player’s career, whether it be a match-winning goal or game-saving goal-line clearance.

EA released another one on March 26, this time for Marco Asensio, giving him an 89-rated LW card for winning the recent LaLiga Santander Challenge Cup, a virtual tournament featuring several players from the Spanish top division representing their clubs in FIFA 20. 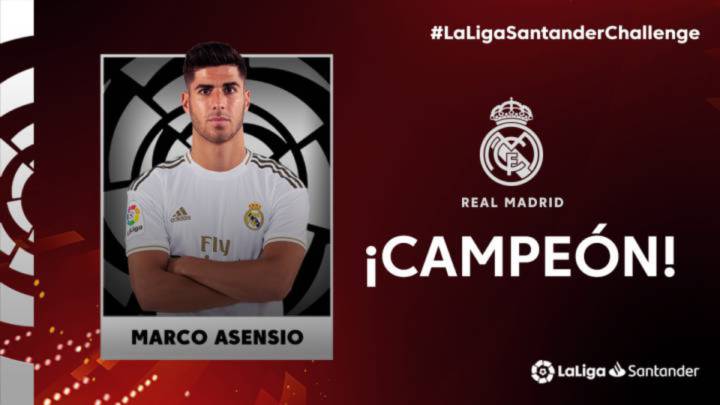 Marco Asensio’s Player Moments card in FIFA 20 Ultimate Team was in honor of him winning the LaLiga Santander Challenger while representing Real Madrid.

Representing Real Madrid, Asensio beat Villareal’s Manu Morlanes 5-1 before taking down Eibar’s Edu Exposito 7-0 in semis and Leganes’ Aitor Ruibal 7-3 in the final. Seeing as how this competition was the closest fans could get to LaLiga action nowadays, EA felt that the Spanish midfielder’s achievement was worthy of this special card.

Because Asensio has had an injury-riddled season without many triumphs to speak of, this is only his third card in FIFA 20, following his regular gold and Champions League versions.

His in-game stats have received a considerable boost, as he now boasts more-than-respectable pace, shooting, passing, and dribbling. Furthermore, when equipped with a Hunter or Catalyst chemistry style, his pace goes into the high 90s and his shooting/passing stats into the low 90s. This SBC is composed of two squad building portions – an 84-rated LaLiga squad and 84-rated Real Madrid team, the latter requiring an In-Form or TOTW Moments. Keep in mind, of course, as is the nature of the FUT market, player prices are constantly fluctuating, so the total cost of this SBC and the individual solutions could go up or down at any time.

Is Marco Asensio Player Moments SBC worth it?

For a card that costs under 100,000 coins at this stage in FIFA, you can’t really go wrong with this SBC. Is it an end-game level card? Definitely not, especially since Real Madrid have a better LW card by the name of Eden Hazard.

However, with EA constantly adding first-owner requirements for a lot of the Objectives, this 89-rated Asensio could really help bolster your LaLiga squad. It has to be said that the card would be worth much more  if it had a central position, like CAM or CF, but with formations being very easy to manipulate nowadays, you can still achieve that with this LW item.

In conclusion, if you think you’re going to find yourself using this card at some point, its agreeable price-point makes it worth doing – but if you can’t see ever needing it, then you should pass.