EA SPORTS have released the LaLiga Santander TOTS So Far in FIFA 20 Ultimate Team, and along with it three more incredible untradeable cards. We’ve got the cheapest SBC solutions, Objectives, in-game stats, and everything else you need to unlock them.

Team of the Season So Far is this year’s twist on the ever-popular TOTS promo in FUT, as EA have had to make some changes with almost every major European league either postponed or canceled.

On May 8, as part of the LaLiga TOTSSF squad, there are three new untradeable cards in the game: a 93-rated Saul Niguez, 92 Sergio Reguilon, and 89 Mariano.

Atleti's engine in the middle of the pitch, Saúl's #TOTSSF SBC is now live in #FUT20 pic.twitter.com/FmEPPzE06T

Saul can be unlocked via a new SBC that’s available now, and both Reguilon and Mariano are available by completing their respective Objectives in-game.

This is Saul’s sixth card in FUT 20, following his regular gold, Champions League, two In-Forms, and Headliners versions. All in all, the TOTSSF one is everything you want in a box-to-box midfielder – almost every stat is in the green except penalties, free-kick accuracy, and aggression.

It’s hard to find a fault in this card; he’s fast enough to compete in the midfield, can put the ball in the back of the net from all ranges, passing and dribbling are on point, and he’s both strong and defensively good enough to take the ball off of anyone.

Those looking for a superb LaLiga and/or Spanish left back not named Jordi Alba can now confidently slot in Sergio Reguilon’s TOTSSF card. The former Real Madrid starlet found himself at home in Sevilla this season, going from a 77-rated card at the start of FIFA 20 to now a 92-rated beast.

Last but not least, we have Mariano Diaz Mejia, who unlike Reguilon, remained with Real Madrid the entire season. While his card isn’t exactly a full-blown Team of the Season, instead just a TOTSSF Objectives card, the Dominican striker does feature some excellent-looking stats for pace, shooting, dribbling, and physicality.

Saul’s SBC has two squad building components, putting his cost at an estimated 202,000 coins on PlayStation 4, 184,000 on Xbox One, and 215,000 on Origin PC, according to FIFA database website FUTBIN.

Here are the current cheapest solutions for both squads, without needing loyalty or position-change cards. Of course, because player prices in the FUT market are always fluctuating, the cost of doing this SBC could go up or down depending on when you do it. 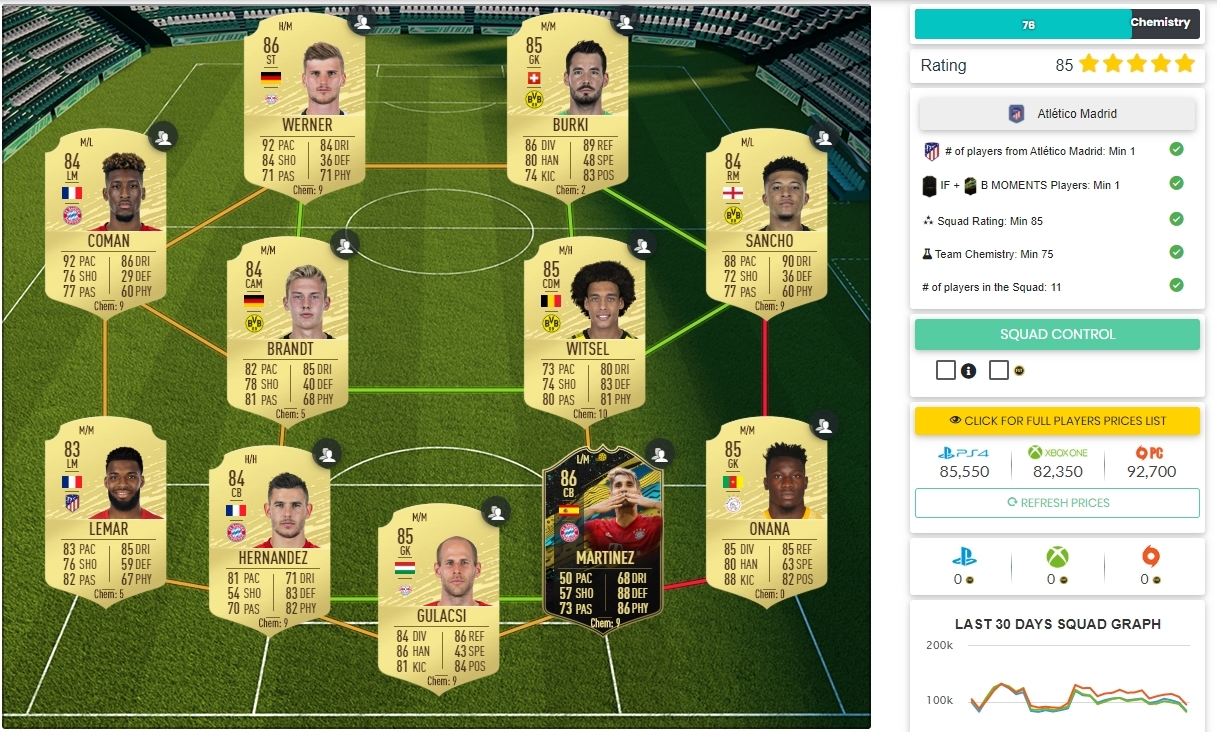 This card will be available to unlock only for a limited time, as you’ll have until Thursday, May 14, to complete it before it expires.

In order to unlock Reguilon’s TOTSSF card, you must first complete four in-game Objectives, each of which offers its own pack reward and XP.

Here are the Objectives for unlocking Mariano’s TOTSSF Moments card. Unlike Reguilon’s requirements, these ones can be done in Squad Battles, so you don’t have to worry about coming up against tough opponents online.

The Reguilon Objectives will be active in-game for two weeks, expiring on Friday, May 22. However, you won’t have as much time to get Mariano’s challenges done, as that card will be available only until Friday, May 15.