FIFA Ones to Watch

FIFA 19 Ones to Watch winter edition FUT cards have now officially been confirmed for this year’s Ultimate Team game mode! This second release of FIFA 19 OTW players is scheduled to become available in FUT packs this week (more details below). Check out our very own FIFA 19 winter OTW predictions!

For those of you who don’t already know, FIFA Ones to Watch (OTW) cards are live items within Ultimate Team. This means that their ratings can change and will upgrade every time the player receives a TOTW (Team of the Week), MOTM (Man of the Match), Purple Hero, Record Breaker, or TOTT (Team Of The Tournament) FUT card. POTM (Player of the Month), Award Winners, SBCs (Squad Building Challenges), and other in-game event selections will not have any baring on FIFA OTW cards.

When a One to Watch player features in one of the aforementioned eligible categories, their OTW card will receive an upgrade to match the exact same OVR (overall rating) and in-game stats as their most recent and highest rated card. It is important to note that these changes can sometimes take a number of hours to update in FIFA Ultimate Team, so rest assured that if you own one of these dynamic items, they will eventually change to their appropriate rating.

The January transfer window was comparatively underwhelming in terms of big name signings moving to top clubs, but bear in mind that these cards would only increase in rating and become more useable in FUT as time passes. Due to the comparative lack of marquee signings in the winter transfer window, a number of people throughout the FUT community initially believed that EA were going to completely overlook the promotion this year.

Others also believed that the recent FIFA 19 Headliners promo was a replacement for this event. However, we can now confirm that a new squad of FIFA 19 Winter Ones to Watch cards will enter Ultimate Team at 6pm UK on Friday, February 15, 2019. Mario Balotelli (83), Álvaro Morata (83) and Alphonso Davies (79) have already been confirmed. Check out our very own updated FIFA 19 Ones to Watch winter edition predictions below! 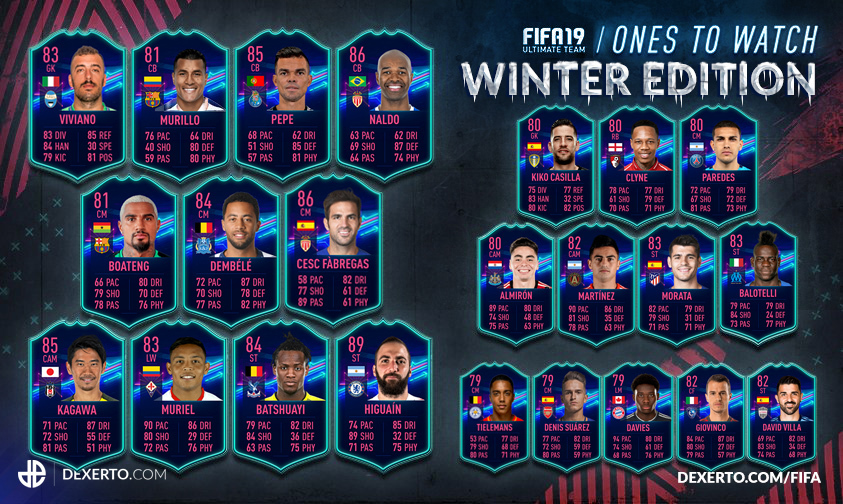 Are you looking forward to the release of these new FIFA 19 Winter Ones to Watch cards? If so, do you agree with our predictions? We would love to hear your thoughts and opinions, so by all means, please feel free to get in touch with us via Twitter.