Following the release of each FUT TOTW, users will be able to view each squad by accessing the FIFA Web App. Users will also have the option to challenge each Team of the Week for bonus FUT coins on either console (PS4 & Xbox One). 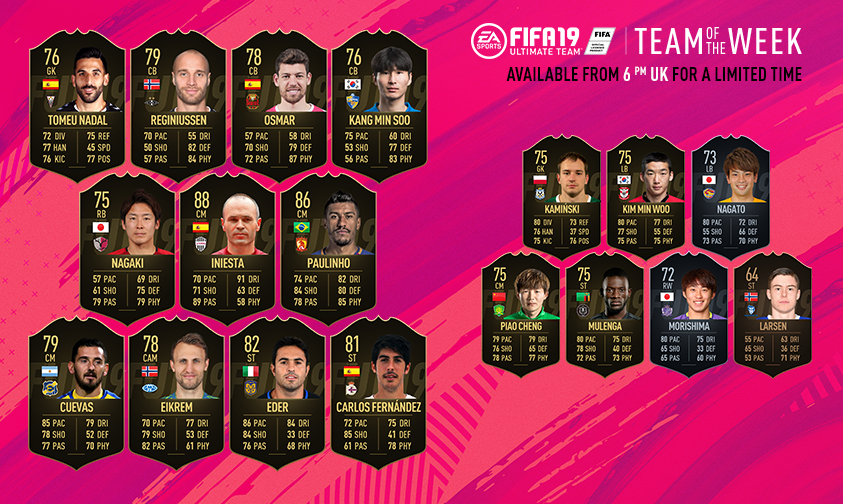 Any players with FIFA 19 Headliners or Ones to Watch FUT items will be receive their appropriate upgrades after the 6pm UK release of this in-form squad. Please remember that these changes can take up to a few hours to update in-game.

Do you agree with this latest FIFA 19 TOTW 40 squad? Are you looking to purchase any of the above FUT Team of the Week cards for your own Ultimate Team? You can let us know your thoughts by getting in touch with us via Twitter.

The wait is finally over ⁠— FIFA 21 TOTY (Team of the Year) is here, with EA SPORTS confirming the long-awaited FIFA 21 promo team is about to be revealed. Some players have already been confirmed as well, including Manchester City’s Kevin De Bruyne and Real Madrid’s Sergio Ramos.

EA has taken a bit of a different road to get to the midway point of FIFA 21 promos this release, bringing in “Headliners” early, and swapping FUTMAS to “Freeze” and the popular Halloween promo Ultimate Scream to “Rulebreakers” instead. However, all roads lead to Team of the Year eventually.

Now the iconic FIFA promo is here, bringing with it the absolute best cards Ultimate Team has to offer. These blue and gold cards are always the most sought after of the year, and often cause a massive market crash when they arrive.

This year should be no different too. Superstar names like FIFA darling Kylian Mbappe, unstoppable goalscorer Robert Lewandowski, and midfield maestro Kevin De Bruyne have been touted for inclusion – and one has now been confirmed.

Last year’s Team of the Year was absolutely loaded to the brim with world-class players.

Only one TOTY player has been confirmed and that’s Manchester City midfielder Kevin De Bruyne. The news was posted by their official Twitter account on the morning of January 22.

On top of that, Real Madrid have confirmed their captain Sergio Ramos once again makes the TOTY.

When will Team of the Year 2021 be revealed?

A number of EA SPORTS countdown graphics show the whole team will release on Friday, January 22.

The iconic FIFA promo should ⁠— as in previous years ⁠— run through releases for strikers, midfielders, and defenders, before adding them all to packs for one final hoorah.

We’ll get our very first look at the promo at 6pm on Friday (GMT). Keep your eyes peeled on our Twitter accounts, @UltimateTeamUK and @FutWatch, to see the news.

Ronaldo has gone from strength to strength at Juventus — does he get into TOTY 21?

TOTY predictions: who makes the 2021 lineup?

The annual TOTY team is the best of the best; eleven world-class footballers who transcended their peers and teammates across the 2020 calendar year.

The Ultimate Team promo begins with a lengthy list of around 70 nominees. Those contenders are then whittled down with a fan vote. This year, stars like Messi, Ronaldo, De Bruyne, Neymar, Van Dijk, Lewandowski, and Mbappe headlined the choices.

In 2020, two teams reigned supreme: Liverpool and Bayern Munich. The former were crowned English champions for the first time in 30 years, while the German heavyweights defied a much-changed Champions League format to stake control over European football in a near-perfect campaign.

Each club defined a stop-start season, lifting trophies despite challenges.

Many think Lewandowski was robbed of a Ballon d’Or this year. His stellar year with Bayern Munich should make him a shoo-in for TOTY.

Here’s the TOTY picks the Dexerto team submitted this time around:

Possible Team of the Year lineup

Here’s our predictions for FIFA 21 TOTY. Will this be the official lineup?

So there you have it ⁠— everything we know about FIFA 21’s iconic Ultimate Team promo, Team of the Year, so far. This is arguably the biggest event of the FUT calendar so make sure you’re ready with plenty of packs, coins, and SBC fodder.