A brand new selection of retro kits have been added to FIFA 20, just hours after being leaked by a data miner, and EA SPORTS are giving them away for free!

EA have been known to add kits from yesteryear to Ultimate Team in recent times, usually available to purchase in the online catalog, and once again they have been added to the popular game mode.

The latest set of classic strips were revealed by data miner FUT Watch on May 7 and were added to the game soon after by developers.

It looks like a new Liverpool kit is on the way… And that’s not all.

These new kits are for three Premier League teams – Chelsea, Manchester City, and Liverpool – with Paris Saint Germain also getting one as well.

This information was first revealed by leaker FUT Watch on Twitter, who posted a snap of the four different jerseys onto their timeline, and they have since been rolling out in-game as free rewards in Ultimate Team. All you have to do is log in, then low and behold, one will be waiting for you to start playing in it.

All four kits can be seen below.

While Liverpool fans have been obsessing over concept designs related to the club’s upcoming reported Nike deal, this classic from the 1989-91 seasons, a period where they won the title with manager Kenny Dalglish, will certainly put smiles on faces.

Away from the Anfield club, Manchester City fans will be delighted to see their leaked kit design, with the brother sponsor printed right across the front, and just look at the other two! They both look like perfect additions to the game. 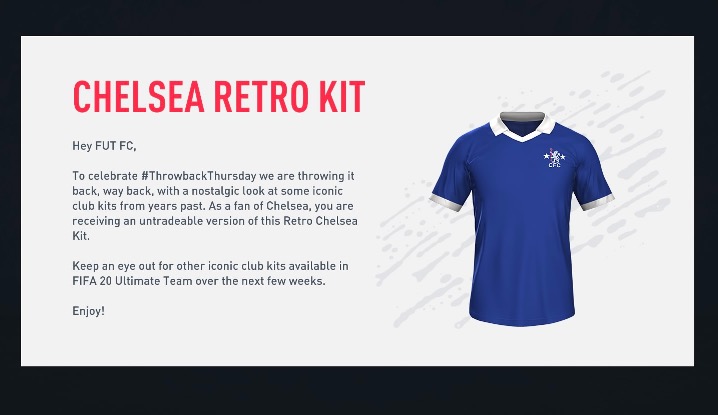 So, there you have it! Those are the four new retro kits in FIFA 20 – exactly the same that we reported as leaked previously – and they all look amazing!

Which one do you prefer from this set? Let us know @UltimateTeamUK.