Popular YouTube star Jimmy ‘MrBeast’ Donaldson found himself getting ‘looked at by snipers’ while spending 24 hours outside of Area 51 as part of his latest challenge.

Area 51 has been the subject of many memes and videos since the viral “Storm Area 51, They can’t stop us all” event was shared on Facebook, garnering interest from over 3 million people on the social networking site.

Popular YouTuber MrBeast, who is known for his extreme challenges and giveaway videos, was the latest to jump on the trend as he challenged himself to stay at the classified Nevada Air Force facility for 24 hours. 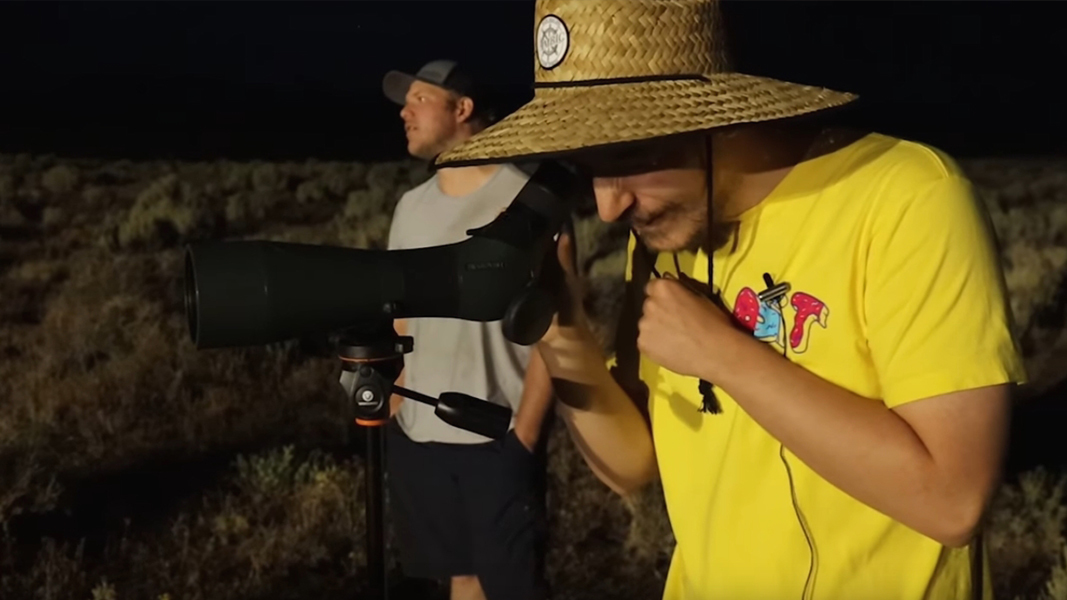 MrBeast using a telescope to scout out the infamous military base, Area 51.
[ad name=”article2″]

MrBeast and his friends began scouting out the area after arriving at the front gates although they were hesitant to stick around for too long after realising they were being watched, “So we’re trying to spend 24 hours in Area 51 but there’s a sniper in a truck looking at us.”

After realising their best bet would be to move on, the group then made their way to the back entrance of Area 51 where they decided to get the 24 hour challenge underway where they encountered many other visitors of the popular location also stopping by.

MrBeast and his friends could hear many aircrafts flying above during their stay outside of the Military Air Force Base but much to their disappointment they did not come across any real UFO’s or Aliens.

After camping out successfully the group then climbed one of the nearby mountains so that they could have a better look at the base using their high powered telescope.

MrBeast jokingly began to organize a plan for the proposed Area 51 raid, marking the locations where each group of people are going to start from.

Despite this being one of the more risky challenge videos that MrBeast has taken part in, they did not seem to encounter much trouble with any of the Area 51 security during their stay.

However, he did not encourage anyone watching the video to follow in his footsteps in scouting out the classified Air Force facility.