Former OWL player Felix ‘xQc’ Lengyel has been banned from Overwatch for 15 days following a report of abusive chat.

xQc found out about the ban live on his popular stream.

He took to Twitter to apologize for his remarks, saying his banter is only supposed to go to people who won’t be hurt by it. 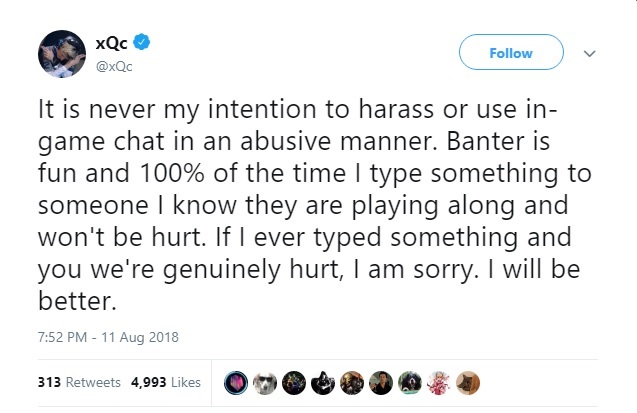 xQc is a member of the Canadian Overwatch World Cup roster and was competing for the starting role as a main tank.

Canada’s first match is in September, shortly after his ban will expire.

The controversial streamer is no stranger to suspensions involving Overwatch, having been banned from the Overwatch League as well.

As a member of the Dallas Fuel, xQc was banned for four games and fined for violating the OWL’s code of conduct after offensive remarks towards Houston Outlaws player Austin Wilmot.

He received a second four day ban for spamming the ‘TriHard’ emote in the chat of the official Overwatch Twitch channel.

Following the controversial behavior outside of the Overwatch League, xQc and Dallas mutually agreed to part ways.