Popular Twitch streamer Felix ‘xQc’ Lengyel has revealed that he received a strike against his YouTube channel for a strange reason, leading him to ask “what the f*** is wrong with this company?”

xQc was reacting to top YouTube PewDiePie’s latest video, where the Swede was going into great detail about the flaws of the video sharing website’s current copyright and video strike system.

PewDiePie explained that when videos are given a strike, it is fully determined by the individual or company requesting the takedown as to whether an appeal is successful. 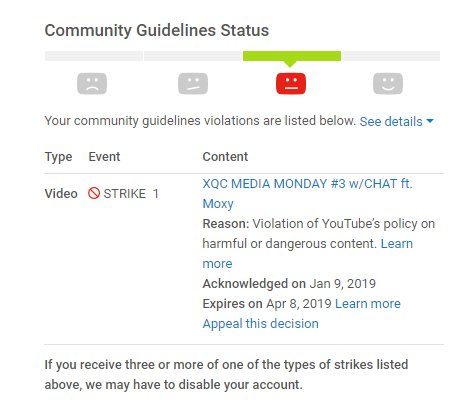 xQc explained his own situation where a video of him reacting to other YouTube videos was removed for “dangerous content”.

“My channel got striked for ‘dangerous content’, right, but in that video, I was watching YouTube videos,” he explains, “I’ll say it again: My video got striked, because the video that I watched was against TOS. But, the videos in that video, were ALL from YouTube directly.”

It’s not the first time that YouTube has handed out a strike against a video which reacts to another YouTube video. Cody Ko had a video completely removed after reacting to a ‘Vape hot box’ vlog, despite the original video still being available.

YouTube has been under increased scrutiny to make changes to its copyright and takedown systems, with the tail end of 2018 filled with complaints from YouTubers being hit with false claims and dubious strikes.

My youtube account just got a STRIKE for the "media monday" vod that I uploaded on there. The reason is: Harmful or dangerous content. That vod is literally me sitting there and watching videos from youtube directly and exclusively, IT EVEN PASSED TWITCH TOS. @YouTube wake up. pic.twitter.com/uFBMS2YrZ5