Top TikTok creator Addison Rae has revealed her amazement at how her life has changed dramatically, since blowing up on the popular app.

TikTok has been taking the world by storm, with many of the app’s top creators, such as Charli D’Amelio, amassing millions of new followers every day in some cases.

One of the most popular TikTokers, Addison Rae, who is a member of the Hype House alongside many of the app’s most notable stars, reflected on her insane social media growth on February 16.

The TikTok star has built a following of over 16 million followers on the popular app.

During her appearance on the NBA All-Star broadcast, alongside fellow creators Charli and Dixie D’Amelio, Addison expressed some of the major changes she had noticed.

When asked what it was like to attend such events with many of the celebrities in attendance, the popular TikToker explained: “It’s so surreal, I think I can speak for all of us, these are opportunities we never thought we would see.”

“Being here is so amazing and collaborating with all of these people and them knowing our names is so insane and we’re just so grateful to be here,” she admitted.

Topic starts at 0:42 for mobile users.

After making her appearance on the NBA All-star broadcast, the popular creator posted a series of tweets revealing that she was shocked at how far she had come since posting her first viral video.

“Actually so crazy that my first viral video was made 6 months ago”, she said, reflecting on the massive change in lifestyle and thanking her fans for their support. 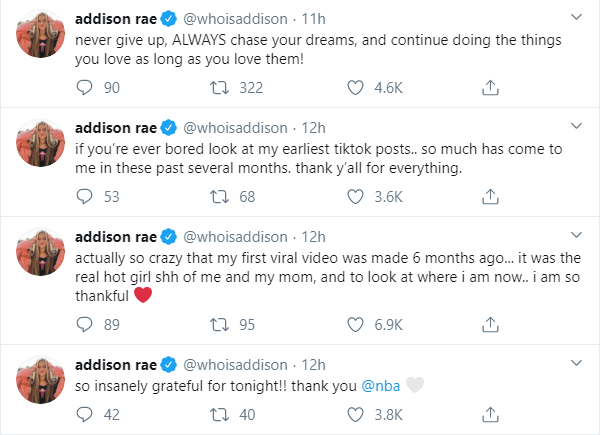 Rae continued to express her gratitude before inspiring fans to pursue their own dreams and to ‘continue doing the things they love.’

Addison has amassed over 16 million followers on TikTok and has even accidentally shut down New York City stores because of her loyal fanbase.