Sea of Thieves, but that hasn’t stopped him from streaming other games like Mordhau on Twitch. However, one player with a very strange weapon might well have made him reconsider trying other titles.

The popular streamer, who has over 3.8 million followers on Twitch at the time of writing, decided to try something different during his May 2 broadcast, playing Mordhau for all of his viewers.

For those who aren’t aware, Mordhau is a medieval multiplayer combat game which was first released on April 29. Trying his hand in what he thought was a world of swords and other blades, Summit1g couldn’t believe his eyes when an enemy decided to strike him with the most unlikely of items. 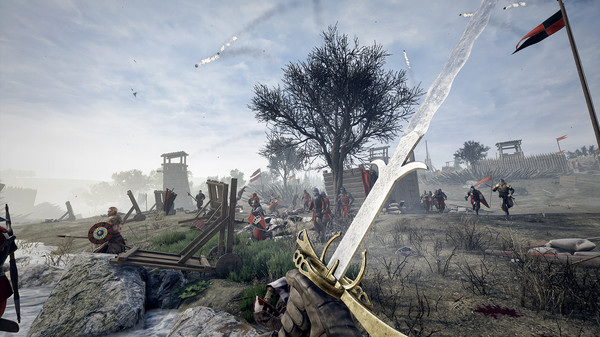 Most players use swords during combat in Mordhau, but Summit1g ran into a player who had skills with a very different weapon.

Approaching a group of warriors, the former Counter-Strike: Global Offensive player couldn’t help but notice that one of the players had switched out his sword for a guitar, A few moments later, they started to attack him with it.

“What the fuck?” Summit said, before using his sword to smash the guitar out of their hand. The enemy was adamant, though, waving his sword around for a brief moment to force the streamer backwards, so that they could reclaim the musical instrument.

“You’re not going to beat me with this bro,” he added. The player then manoeuvred the guitar to use it as both a shield and a weapon, before striking him down.

“I hate my life so fucking much it’s unbelievable,” Summit1g said, laughing at what had just unfolded during his livestream.

Whether or not Summit1g will continue to play the game in the future remains to be seen, but surely the guitar won’t scare him off too much. After all, it can also make for some hilarious moments. Just like the instruments in Sea of Thieves, players can play their own songs during combat.

Who wouldn’t want to play a game where you’re getting hit by guitars?