Twitch streamer ‘asduvvy21’ was left speechless after receiving almost $5,000 from one donor, helping him smash his donation goal to go to the Philippines and meet his biological father.

Most streamers have a donation goal attached to their broadcasts to put the money their fans give them towards a good use. Sometimes it’s an upgrade to stream equipment, rent for the next month, or a holiday.

For asduvvy21, he was looking to go visit his dad in the Philippines, and was slowly banking up his money heading into the new year.

The streamer was just minding his own business in his three hour Killer Instinct podcast, when serial donator ‘Fatty Melon’ dropped by to say hello and wish the streamer well. Instead of just kind messages though, Fatty Melon left a much bigger gift, a donation worth almost $5,000. 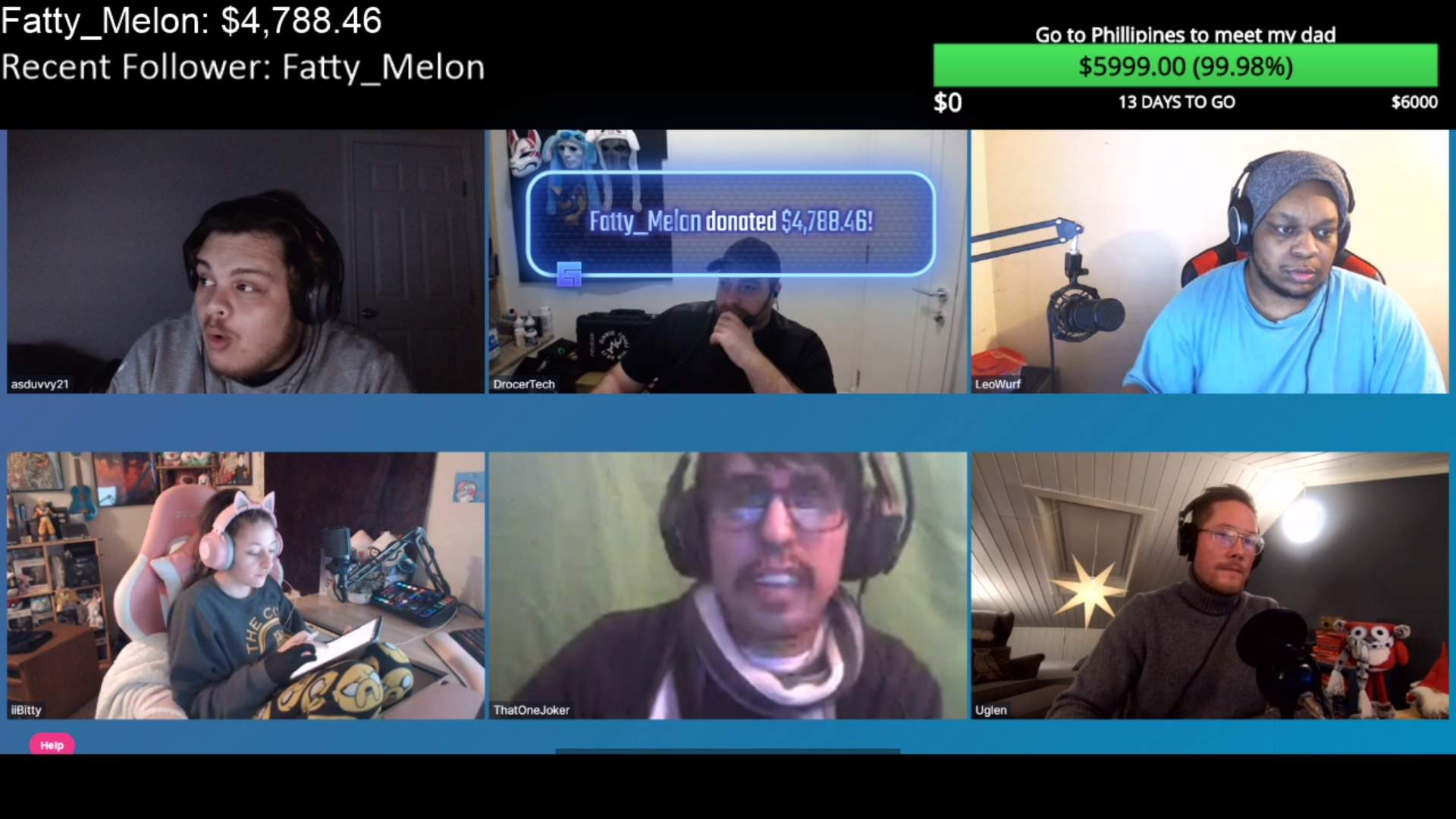 Asduvvy was left shocked after seeing the donation ring through.

As the donation rang through for $4,788.46, asduvvy had no idea what to do other than leave the room. He threw his headset in shock, leaving his fellow podcasters unsure as to what happened. However, once they saw what happened, they collectively lost their minds.

“Oh my god,” was all ‘iiBitty’ could muster, as the rest of the cast gazed upon the mega donation in awe. “Yo, you’re going to see your dad,” said ‘ThatOneJoker’.

It took asduvvy a few minutes to compose himself and come back to the stream, where he was met with rapturous applause and a lot of love. He described how much it meant to him to receive the donation, and where the $6,000 his viewers lovingly put in would go.

“My birthday is in February, and I’d really love to go out there for a couple of weeks right around then. I still have to grab my passport, I just got the pictures for that, and now gotta figure out the details. I can’t breathe.”

The streamer was elated with the prospect of visiting long-lost family, and still couldn’t believe what had happened even well after the broadcast ended.

“Thank you so much Fatty you don’t understand what it means to me to have this opportunity,” he said in a Twitter post. “This is just the beginning of the journey. My mom is in disbelief and told me thank you a thousand times.”

Thank you so much @Fatty_Melon you don’t understand what it means to me to have this opportunity. This is just the beginning of the journey. My mom is in disbelief and told me thank you a thousand times. https://t.co/DUUP75J9do

Fatty Melon is no stranger to dropping dosh to make a streamer’s day. While his identity is unknown, he’s given out thousands to small-time Twitch broadcasters to completely change their lives.

He gave ‘MissBehavin’ $2,500 on December 15 to upgrade her entire PC setup, while he dropped over 200 subs into Will Neff’s channel in November, making the streamer tear off his shirt in excitement.

The $5,000 donation to asduvvy is one of his biggest yet, and arguably the most impactful. The small-time podcaster is now set for a once-in-a-lifetime trip, and will finally get to meet someone so close to him after all of these years.