PewDiePie explains why anti-vaxxers need to be stopped - Dexerto
Entertainment

PewDiePie explains why anti-vaxxers need to be stopped

YouTube king Felix ‘PewDiePie’ Kjellberg took shots at the anti-vaccination movement, and had a solution for how to stop it after reacting to several outbreak incidents.

PewDiePie is without a doubt the biggest individual YouTuber in the world. With over 102 million subscribers across the globe, he’s one of the most influential entertainers of 2019.

The Swede was reacting to submissions on the ‘Facepalm’ forum of Reddit when he came upon several of them involving anti-vaxxers, and had a tough stance on the movement.

The Swedish YouTuber is one of the biggest entertainers in the world.

The YouTuber was reacting to an article posted to the r/facepalm subreddit about a person with measles who went to an NBA game and infected 22 other attendees.

“Oh God, I genuinely facepalmed. Twenty-two peopled infected! Stop! This is where the government needs to steps in and just f**king vaccinate everyone!” he exclaimed, explaining his solution to the problem.

“What are they gonna do next!? Put chip in our hands!? Government, stay out!” he said, mocking members of the movement who believe that vaccines are used by the government for nefarious reasons. 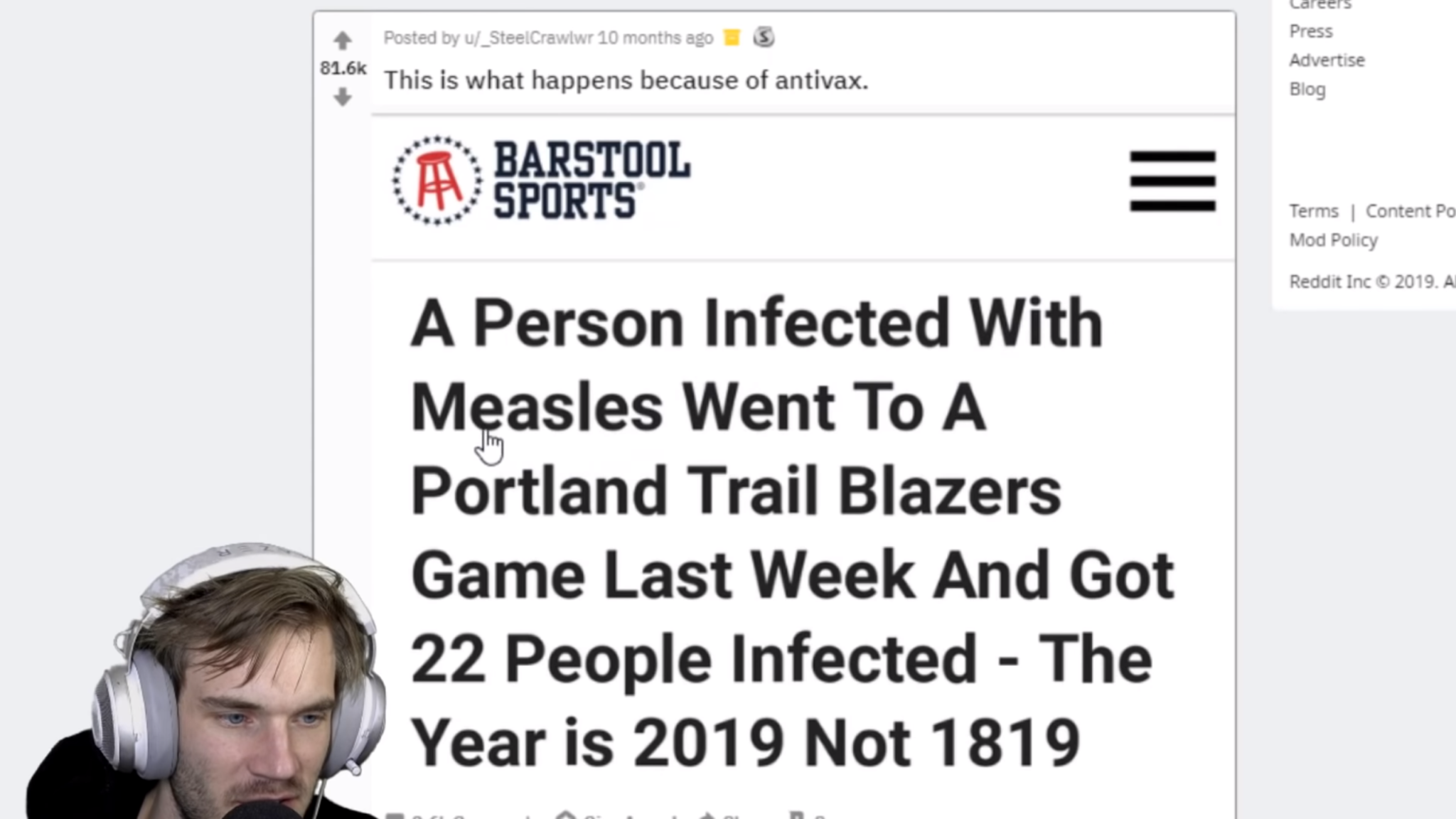 PewDiePie was stunned by a story about a measles outbreak.

Later on the video, Pewds came across a social media post submitted to the forum that was from a mother who questioned if she was a terrible parent after her child contracted whooping cough from not vaccinating.

“Could I have prevented this?” the YouTuber read out loud, before breaking into laughter and slapping his forehead. “That is such a facepalm!” he exclaimed, as he couldn’t believe what he’d just read.

“Am I a terrible mother? Yes!” he exclaimed in response to the person. He then took another shot at anti-vaxxers who believe that it causes autism. “But my child now has autism. Poof! It has autism!”

PewDiePie continues to have an incredible year, growing his channel to over 102 million subscribers in 2019, marrying his best friend Marzia ‘CutiePie’ Bisognin in August, and buying a new house in Japan.

The Swedish star was recognized by YouTube in their yearly round up video ‘Rewind’ and was listed as the most viewed channel on the platform. He was also credited with making Minecraft the most watched game this year.