Outrage has poured in on social media after Love Island star Molly-Mae Hague’s new dog has died after just six days of ownership.

Molly-Mae’s boyfriend, Tommy Fury gave her ‘Mr Chai’, a Pomeranian puppy, for her 21st birthday which she documented on her YouTube channel. Within a day, they had already set up an Instagram account for the dog called ‘@MrChaiBear.’

But in a statement shared on both Tommy and Molly-Mae’s Instagram stories, they announced that Mr Chai had died, only six days later.

The statement said: “Our beautiful new puppy Mr Chai was taken ill in the last few days and tragically has passed away.

“We are really hoping that we can get some clearer answers in the coming days whilst we wait for details and more information from the veterinary experts.

“Myself and Tommy are completely in shock and truly devastated. In a world currently full of tragedy and loss, we understand there are far greater issues than this. We just need to share the information in order to start the process of trying to accept and over come this awful situation.” 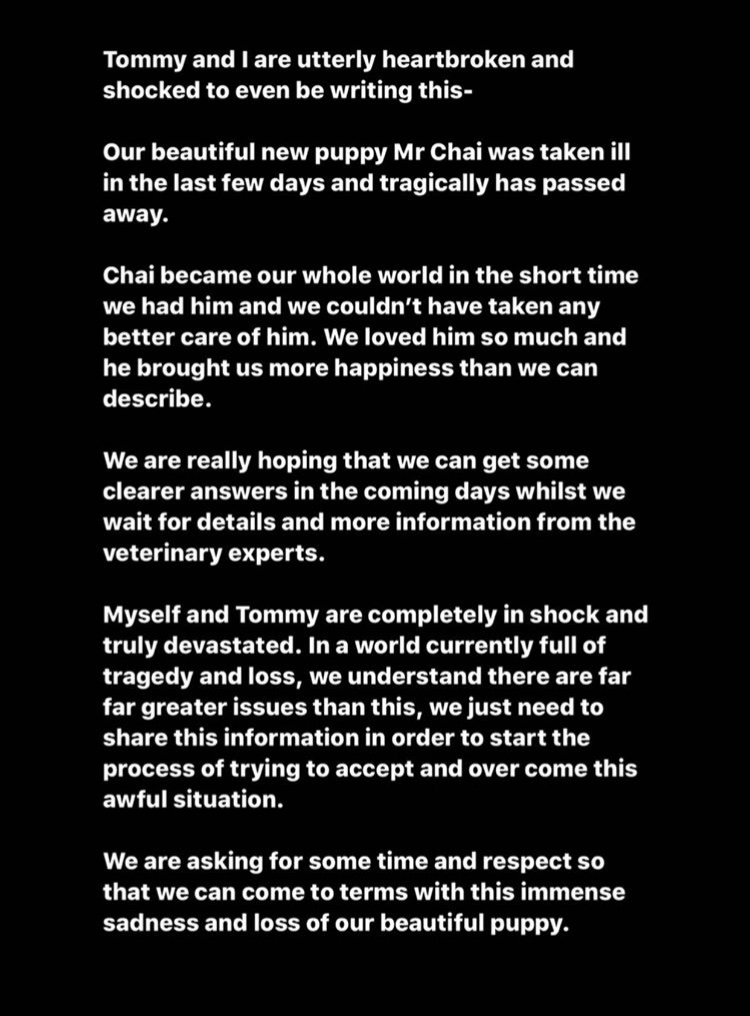 One concerned user on Twitter wrote: “That’s what you get when you buy a designer dog as an accessory for Instagram likes.”

So that meathead Tommy Fury shipped Molly Mae’s birthday present Pomeranian from a puppy mill in Russia and now it’s died after 5 days. That’s what you get when you buy a designer dog as an accessory for Instagram likes.

Another person tweeted that the situation ‘should really highlight the dangers of shipping dogs from overseas.’ They also added the hashtag ‘AdoptDontShop’, which encourages would-be pet-owners to look first to animals up for adoption.

Molly Mae and Tommy’s dog passing away, a week after they purchased it from a ‘luxury’ dog breeder and imported it from Russia, should really highlight the dangers of shipping dogs from overseas. #AdoptDontShop

Elena Katerova came under fire in 2018 after she reportedly sold a Pomeranian puppy that had a metal splint inserted into its leg six weeks before it was bought by a customer.

According to the Tiffany Puppies Instagram account, Former Love Islanders Belle Hassan and Laura Anderson have bought puppies from the same breeder. Other customers include the TikTok star Lea Elui, who has more than 11m followers on the platform, Loren Gray and HRVY.

Molly-Mae and Tommy Fury met on the set of Love Island in 2019 where they won runners up behind Amber Gill and Greg O’Shea. The pair have a combined 7.3 million followers on Instagram.