Popular YouTuber KSI is known to flex his wealth, after uploading a video in 2018 buying a $200,000 watch and another spending $10,000 on shoes – but one of his most expensive possessions is a one-of-a-kind necklace.

KSI revealed his $500,000 “Beerus” chain in early March, modeled after the character of Dragon Ball Super fame and the subject of his rap single of the same name.

He’d had the chain custom-made from the same vendor who had sold him his watch, which included 2,000 stones of such gems as sapphires, yellow diamonds, and even 18 karat gold in what took over 550 hours of craftsmanship to achieve.

KSI later admitted that he didn’t keep the medallion in his home, claiming that he’d locked it away in a safe at a bank, instead – but one internet troll claims to have pilfered the YouTuber’s incredibly expensive status symbol.

A Tweet surfaced on June 23, with a poster claiming to have found the chain for sale on Ebay, a popular site for auctioning off various items.

https://t.co/duJOXVfQHP chains going for a fiver, not a bad bargain considering he bought it for 500k

KSI’s reaction to the claim stirred hilarious discourse online, with the YouTuber simply writing, “Yo, wtf is this?”

While some commenters truly believed the chain had been stolen, a quick look at the item description shows what appears to be an obvious troll, with the poster naming the jewelry “KSI’s BEERUS CHAIN – HELLA DIAMONDS.”

That’s not all: the poster went on to call the chain’s style “stupid,” with it’s main color being “shiny,” even writing that Sidemen member Miniminter comes with the purchase. 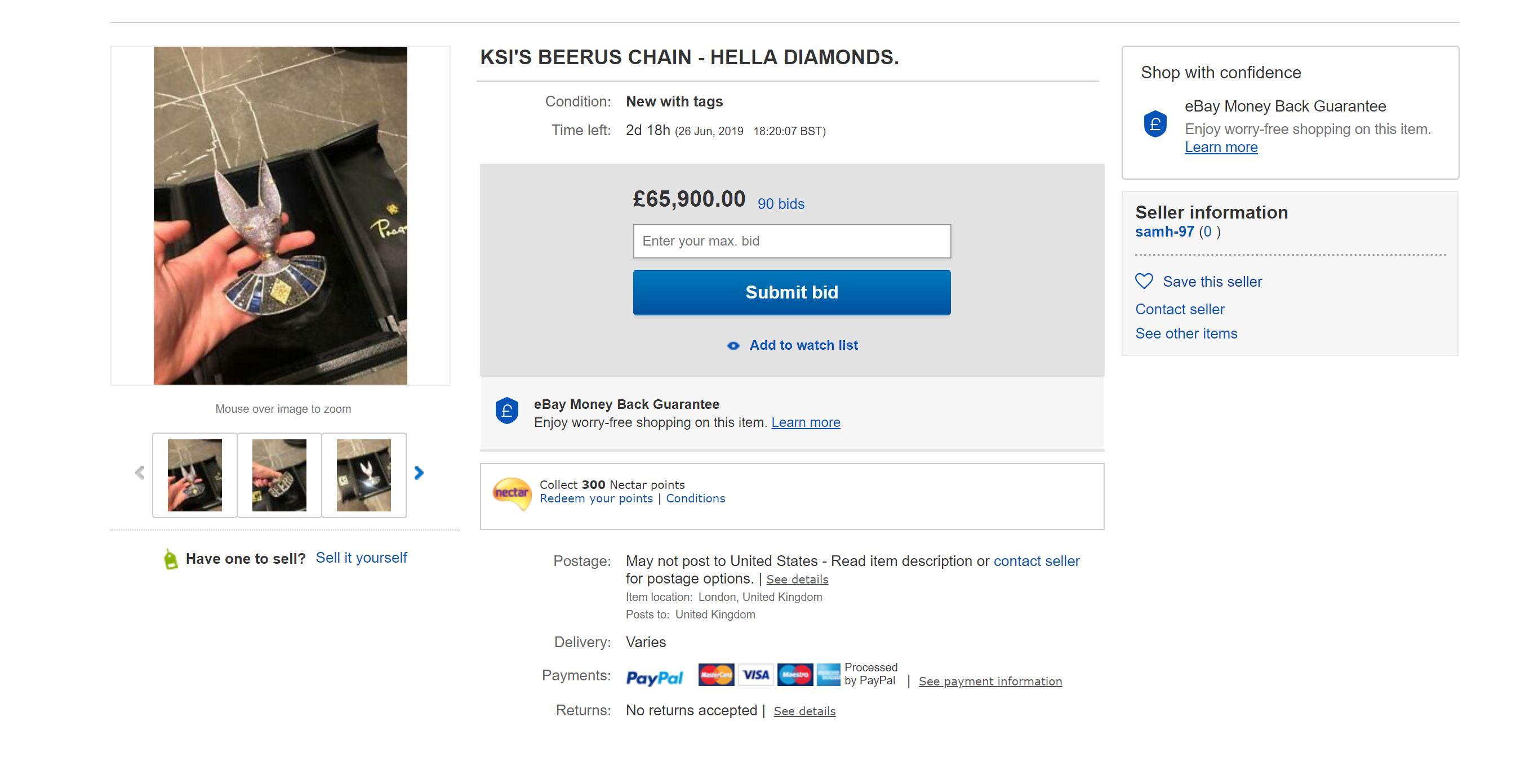 “THIS IS 100% LEGIT, NO TROLL,” the poster wrote. “CBA TO COUNT HOW MANY DIAMONDS, BUT AS YOU CAN SEE. THERE’S LOADS. P.S I DID ROB THIS FROM THE BANK IT WAS BEING KEPT IN.”

The item was still up for grabs at the time of KSI’s posting, with over 90 bids having been placed on the chain – but the item has since been removed from the site, likely at KSI’s behest.

KSI is set to face off against rival YouTuber Logan Paul in November 2019 – a fight that has been delayed, with Paul claiming that he’s taking his time to maximize profits for both parties, should KSI actually lose his chain.