July’s fastest growing Fortnite may be weaning, with some of the game’s biggest names plummeting down the list.

The growth of Twitch channels is a good way to see what games are popular on the streaming platform, with streamers who broadcast the most popular games regularly rising up the ranks as the fastest growing channels.

The release of Teamfight Tactics has helped a number of streamers have huge jumps in their growth in terms of followers, however another surprising side effect is the lack of growth in channels who are linked to battle royale game Fortnite.

Ninja finds himself low on the top 20 Twitch channels list.

Surprisingly though, World of Warcraft streamers make up a quarter of the top 20, with streamers such as zperfection_tv and German emmadizzy sitting in fifth and sixth respectively.

Teamfight Tactics has served NZXT’s channel very well as it sits third, while Jeremy ‘Disguised Toast’ Wang, who has also been grinding Riot’s auto-chess game just missed out on the top 20. 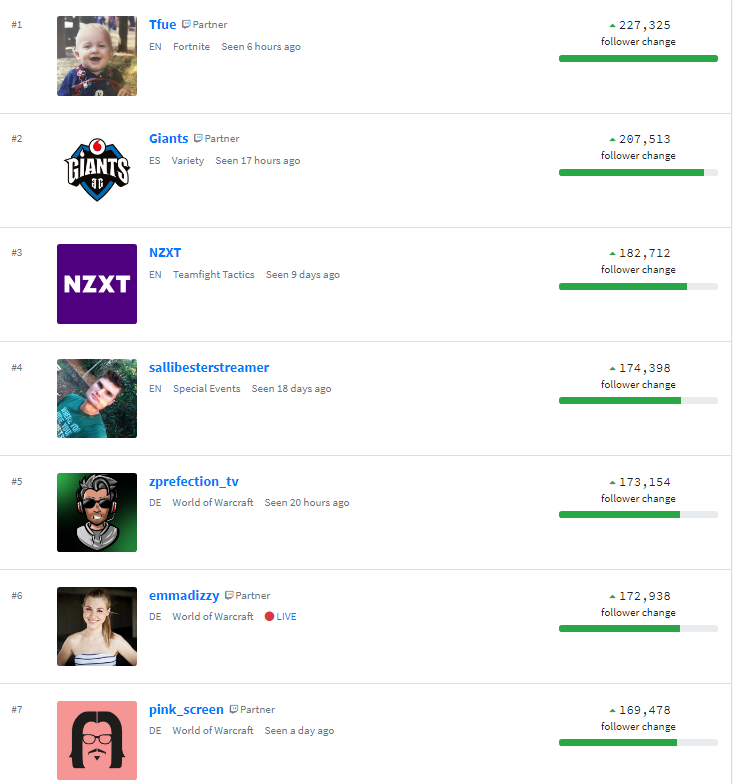 Teamfight Tactics and World of Warcraft dominate the standings.

Turner ‘Tfue’ Tenney remains the fastest growing channel on Twitch, streaking ahead of his nearest competition by 20,000 followers, however Fortnite appears to be the big loser in July, with Fortnite channels struggling.

Even Tyler ‘Ninja’ Blevins, who is widely recognized as the biggest streamer on the platform, hasn’t seen the incredible growth he is used to, sitting all the way down in 18th position for July’s channels.

The fact that Fortnite streamers are perhaps seeing a downturn in growth comes as little surprise, with a June report from Nielsen stating that the game’s overall earnings had plummeted by 38% between compared to the same period last year.

Whether this is just a blip thanks to the early popularity of Fortnite remains to be seen, but it’s telling that only two Fortnite streamers rank in the top ten fastest growing channels on the site.