IRL Streamer Witnesses Bad Crash While Broadcasting from His Car

Ebenezer ‘EbZ’ Lembe was driving in his car on stream when a bad car crash happened right in front of him.

EbZ had the camera pointed inside of his car as he approached an intersection in Los Angeles.

Honking and a crash noise was then heard as a shocked EbZ reached for his camera to show what just happened. The clip starts at 40:00 minutes in the video below.

Once the camera was turned around, his audience could see the results of the crash. The wreckage involved two cars in the intersection, right in front of EbZ’s car.

Not wanting to take the chance of another crash due to a backed up intersection in Los Angeles, EbZ drove away to safety with his camera capturing the aftermath.

Bystanders were spotted tending to the crash victims, though it is unknown what happened to them. A person can be seen getting out of the passenger side of the white car.

EbZ is a YouTube personality and IRL streamer who predominantly streams from his car driving around Los Angeles.

Singer-songwriter Halsey is pregnant – and social media, from influencers and YouTubers to countless fans, has lit up with congratulations for the beloved cultural sensation.

Ashley ‘Halsey’ Nicolette Frangipane is an American singer-songwriter with Grammy nominations, Billboard accolades and, above all else, a feverish social media following. Known for her activism and eclecticism, the musician has become a cultural icon with fans across the world.

That variety of fans is not restrained to just social media stans, either, as the singer has apparently amassed a ton of appreciation from fellow influencers. Some of the biggest names from YouTube and social media have popped up congratulating her, nestled between messages from the 36.9 million followers Halsey boasts throughout Instagram and Twitter.

Posting a “surprise” Instagram carousel of baby bump pictures, the 26-year-old’s comment section is filled with verified check marks sending their love and joy. From established models (and fellow activists) like Emily Ratajkowski to YouTube superstars like James Charles, the support has been nothing short of overflowing.

In the replies to Halsey’s viral IG post, influencer Gabbie Hanna was joined by TikTok legend Addison Rae by sending an ecstatic “congratulations” message. Singer Olivia Rodrigo, whose “Drivers License” track has gone viral on TikTok, joined in too, but wasn’t satisfied with just one message.

In all caps (the pinnacle of excitement), Rodrigo sent a “YESSSS” before following up with a “SENDING U SO MUCH LOVE.”

Similarly uppercased, Charles chimed in with a reply that seems to concisely echo the sentiments shared by all of Halsey’s fans and friends: “CONGRATULATIONS AHHH.” 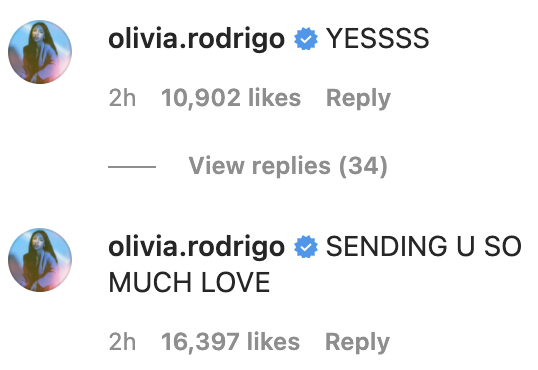 Aside from being happy about the idea of a mini version of Halsey entering the world, close fans are likely well-aware of how meaningful the moment is for her. The singer has been candid about her past with infertility and her desire for a child, as a 2015 miscarriage prompted the song “More” on her Manic album.

In the wake of such a harrowing history with the desire to bear a child, the news of Halsey’s pregnancy is certainly cause for celebration. Caps-locked congratulations are most certainly in order and few, influencers and fans alike, have held back in rejoicing with the singer and her boyfriend, screenwriter Alev Aydin.

“More,” too, can now be played with added joy. Some of its more expressive lyrics take on a new dimension, as a foreseeing welcome to her baby: “And when you decide it’s your time to arrive, I’ve loved you for all of my life.”