While the two were checking out a store in South Korea, HAchubby noticed a lot of memorabilia for the K-Pop group “BTS” also known as the Bangtan Boys. Notably, the IRL streamer took a major interest in one member of the group: Jimin.

As HAChubby ventured off screen and out of the store, Jake hinted that he would purchase something for his friend for her birthday when he casually turned the camera on himself and grinned slyly.

After getting some assistance from his chat to pick out the photo book that HAchubby had her eyes on, Jake took it to the cash and paid for the K-Pop merch to surprise her with.

The world-traveler then walked into a barbecue restaurant to join the birthday girl and handed her the bagged present.

“Happy birthday!” he exclaimed, causing the female’s eyes to light up. “What’s this?” she inquired.

When she pulled the BTS photo book out of the bag, Chubby lit up like a Christmas tree, overjoyed at the surprise present.

The gift was a fantastic gesture and very well-received. Smooth move. 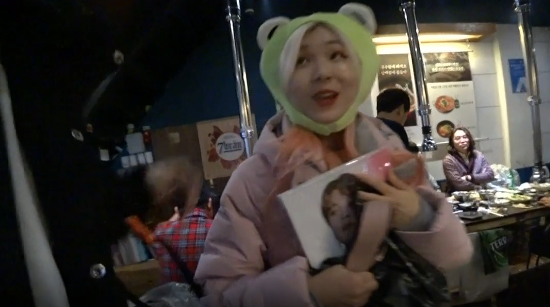 During November, the two streamers have combined to produce some quality content in South Korea. Notably, HAchubby, shocked everyone watching when she nailed a bullseye in archery and proceeded to mock her ‘boomer’ friend.

Video of the perfect shot and the banter between the two went viral, a testament to how much on-screen chemistry the two Twitch stars have together.

Hopefully, the two continue to hang out on stream so we can witness even more of their playful antics when Western and Eastern cultures collide.