Doc has often been the envy of other streamers for his over-the-top movie-like production values with an extremely long intro, mid-stream gags and fleshed out content.

Now, the two-time has traded in his wheels for a new hovercraft to get to “the arena” to play video games and dominate the competition. 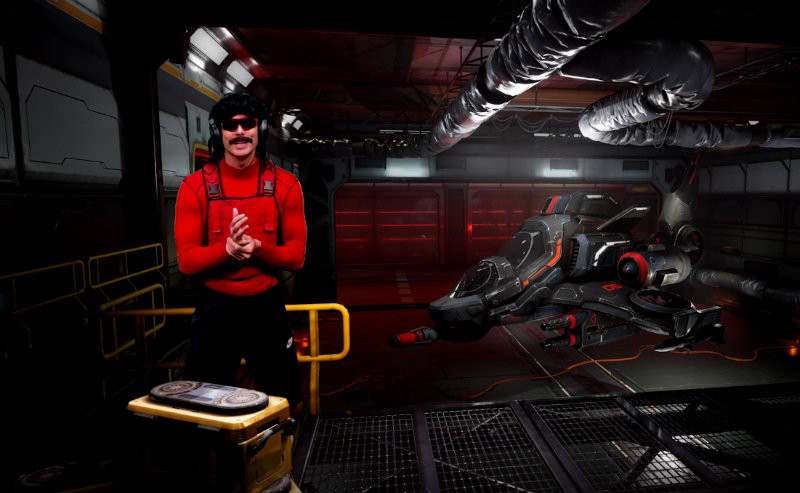 The craft amusingly and self-reflectively has “2x-9394” on its side – an obvious reference to being the 1993 and 1994 video game champion. Though, it also fits nicely as a model of the craft he pretends to pilot.

Eventually, the screen goes into a first-person view as the craft enters an underground hangar of sorts with a door automatically opening. The hanger itself is also fully animated with an additional craft parked in the docking bay.

It looks very similar to a menu screen in a game such as StarCraft 2: Wings of Liberty where players take the role of the Terran – a futuristic human faction.

After walking onto the screen, Doc checked out the docked craft. “It cost me $22.5 million,” he said, obviously playing up his baller attitude and not breaking character.

“The underground hangar that you see right here,” he continued, “$6.3. Why? So I can stand right here for one minute and twenty-two seconds and talk to you guys while looking so damn good on the fastest day of the week. Turbo-Tuesday’d out of our mind.”

Before finally deciding to go on with his stream and gameplay, the Doc took a job at both Epic and EA while conceding he would still be playing their games.

“Fortnite 2, huh? What a joke. But we’re playing it. Because EA told us, ‘we’ll pay you to play the game and make fun of it’,” he joked and added that he would be playing Apex after that was over with.

There’s no telling how Doc plans to top his latest hangar and hovercraft, but chances are he’ll find a way and blow everyone away yet again.