KEEMSTAR uploaded a caption from one of Corinna’s Instagram posts, where she embraced her body without using photoshop and encouraged other women to do the same.

However, KEEMSTAR saw the opportunity to make a joke out of the caption, tweeting, “Now I understand why Logan Paul was obsessed with the flat earth,” in reference to Kopf’s booty pic (and her short-lived relationship with Paul). 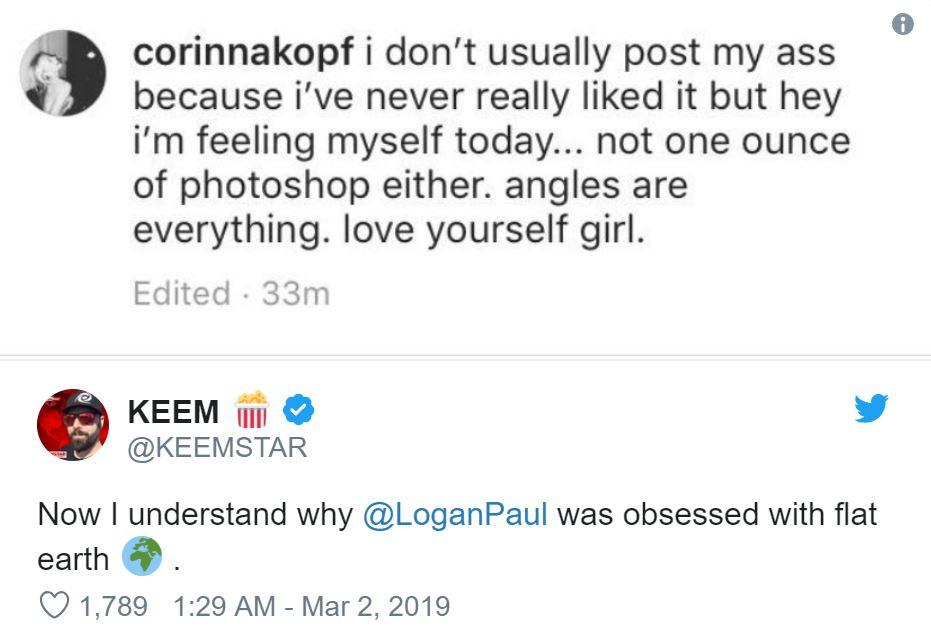 Corinna was not happy with KEEMSTAR’s comment, and went on to slam the YouTuber in a series of scathing tweets.

“You have some UNREALISTIC expectations for women’s bodies,” Corinna replied. “…THIS is why women have confidence issues with their bodies, and I won’t give in to it.”

Kopf went on to further call out KEEM for his post, writing, “Why some men feel the need to comment on a women’s physical appearance when it has absolutely nothing to do with them will never cease to amaze me.”

KEEMSTAR didn’t appear to be fazed by Corinna’s comments, as evidenced by a tweet he published shortly thereafter.

“Omg, they are calling me a body shamer again,” he said of the debacle. “I don’t care if the whole world turns into social justice warriors. I’m still going to be KEEMSTAR & your tears won’t change me.”

This isn’t the first time KEEMSTAR has been called out for body shaming, either; KEEM faced mass backlash after comparing the body of model Erika Costell to that of YouTuber Eugenia Cooney, who is widely speculated to suffer from a severe eating disorder.

keem you’re a piece of trash.

this girl is drop dead gorgeous regardless if we’re together or not..

you deserve to be dragged for this..

dear internet, why tf do you allow this, but then turn into ruthless animals when I put a blindfold on? https://t.co/2dEmO5zdLP

Costell’s ex-boyfriend, YouTuber Jake Paul, came to her defense in a series of heated tweets – despite their highly-publicized and emotional split in 2018.