IRL Twitch streamer Johnny_Now was in for quite a surprise when a balloon stunt went wrong during his latest 30 Days in a Cage challenge.

Johnny, who gained a following when he first spent a month in a cage in 2018, has returned to his roots this October by going back inside. During the challenge, the streamer has to spend 30 days inside a home-built cage.

Balloon week is part of the challenge. This means that every time Johnny has been getting a new sub, a balloon has been blown up and added to the cage. As he has been receiving a lot of subs, the cage has been filling up with a lot of inflatables. 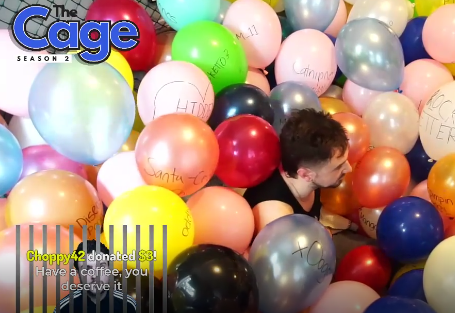 Johnny had previously revealed how the balloons have been affecting him but had said that the toughest part of spending a month in a cage was the toll it took on his sleep schedule.

“I slept like a baby drowning in a sea of balloons,” Johnny told his viewers.

However, he got annoyed when one of his viewers mocked him, writing: “I slept like a balloon last night.” Clearly aggravated that his own viewers would delight in his suffering, the caged entertainer stormed off to the side of his cage.

Eventually, the sleep-deprived streamer stared at the camera before attempting to fall backwards onto the pile, but the balloons couldn’t support his weight, and Johnny hit the floor awkwardly.

“Ow, I hurt my back,” he can be heard saying from underneath the pile of balloons. “That did not work out. You guys said that [they] would support my weight!”

While Johnny was clearly in pain, he continued with the rest of the stream like a trooper and marched forward into the next day of the challenge.

Speaking to Dexerto on October 11, the streamer said that he views his time in the cage “as a very cleansing experience”, and that he “had never felt better than when I left the cage for the first time after 30 days.”

At the time of writing, Johnny is on day 11 of his challenge with 19 days to go.