15-year-old YouTuber reveals why she faked her own pregnancy

15-year-old YouTuber Danielle Cohn shocked the internet after announcing her pregnancy and wedding in early April – but some fans were skeptical that the announcements were merely a prank.

Cohn later came out with a statement confirming that both her pregnancy and the wedding were faked, claiming in an Instagram video that she and her boyfriend Mikey Tua had only meant to prank their parents and friends during a trip to Las Vegas after being inspired by Netflix series ‘13 Reasons Why.’

That’s not all; Cohn likewise stated that the prank was meant to draw awareness to body-image issues and shaming around teen pregnancy, while also hoping to “give the haters something to talk about.”

“Never in a million years thought that it would be on news articles, it would be on Twitter’s most trending,” Cohn said of the debacle. “I never thought it was going to go that big. I just thought of it as a prank that we were doing for fun.”

That’s not all; the duo appeared in a separate video on Tua’s Instagram account, where they made a statement on teen pregnancy and claimed that 15% of their earnings from their four-part YouTube video series on the prank would be donated to Planned Parenthood.

We will be donating 15% of the earning to planned parenthood… Please also rember it was just a prank but we are sincerely sorry to the people who got offended. For the people who enjoyed it thank you :pray:

However, the final video out of Cohn’s four-part series is missing from her YouTube channel, as are a few of Tua’s Tweets on the matter – and some fans aren’t happy with their explanation of the prank, despite their promise to donate and spread awareness.

“It’s not funny to do that, there are people out there who would do anything to have a baby and you just shat on them, fuck you both,” one user wrote of the issue. 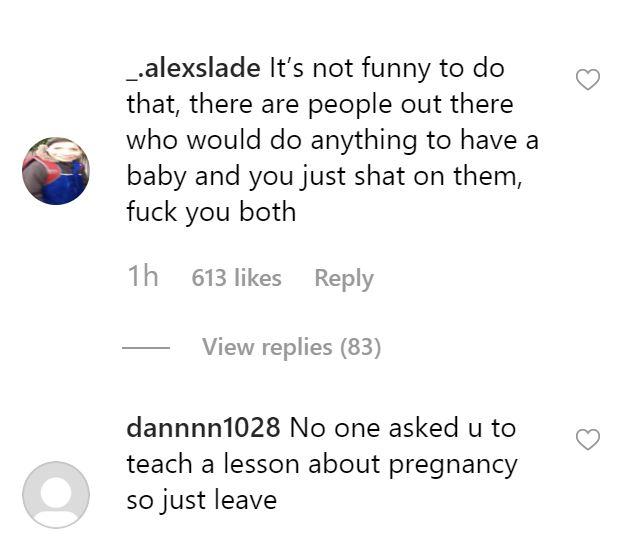 Despite the couple’s apology, fans were not happy with their prank, with some even wishing infertility on Cohn.
500

“…she deserves to lose all her subscribers and followers and fans, another Tweeted. “Sorry, it’s harsh but it’s true. This is so offensive to people who can’t have kids and like, wtf, use your head next time you plan a prank.”

you’re really fricken stupid if you think this is funny. she deserves to lose all her subscribers and followers and fans. sorry, it’s harsh but it’s true. this is so offensive to people who can’t have kids and like wtf use your head next time you plan a prank.

Cohn has since posted a slew of positive messages regarding the incident to her Instagram story, appearing to “block out the haters” in response to the backlash.