The latest Weekly CoD:WWII Community Update has been released by developer Sledgehammer Games.

The CoD community has been vocal about wanting a further look into WWII’s future than just a single week, so Sledgehammer has included what playlists and contracts will look like for multiple weekends.

There are a few 2XP weekends on the way and a midweek Domination playlist for double Division XP that starts on Wednesday, July 18 at 10:00 AM PST.

Those looking for new weapons have until July 17 to pick up the Stinger contract, which is followed by a contract for the Nambu Type 2.

For the full list of updates coming to CoD:WWII, check out the full July 13 Weekly Community Update below.

Weekend Warfare Playlist. Not only do we have 2XP for you on all modes, but One Shot and HC Ricochet have made their way back for this weekend as well, so check out the Featured Tab for these temporary playlists. Make sure to get in some quality game time before 10AM PDT Monday, July 16.

Weekly Weapon Contract. This week, it’s for the Stinger! Pick it up from Captain Butcher before 10AM PDT on Tuesday, July 17.

Community Challenge Status. You’ve completed Tier 2 and are almost done with Tier 3. Make sure to head to the HQ and collect your ‘British Flag’ Weapon Charm reward in the Mail. And Zombies players, there’s a Zombie Consumables Supply Drop waiting in Nazi Zombies for you too!

Next Midweek Mobilize Playlist. We’ve got 2DivisionXP on Domination coming next Wednesday! Live next week from 10AM PDT on July 18 until 10AM PDT on Thursday, July 19.

Next Weekend Warfare Playlist. 2XP on Wanderlust Basic Training playlist and 2XP when you party up on any mode! Enjoy starting at 10AM PDT next Friday, July 20 until 10AM PDT on Monday, July 23.

Next Weekly Weapon Contract. Next week, it’s for the Nambu Type 2! Make sure to swing by the Quartermaster and pick it up starting at 10AM PDT next Tuesday, July 17.

Master Prestige Rewards. We’re almost ready to release these! They’ll be coming in our next big title update. Thank you all for your patience.

A Letter from the B.A.T. 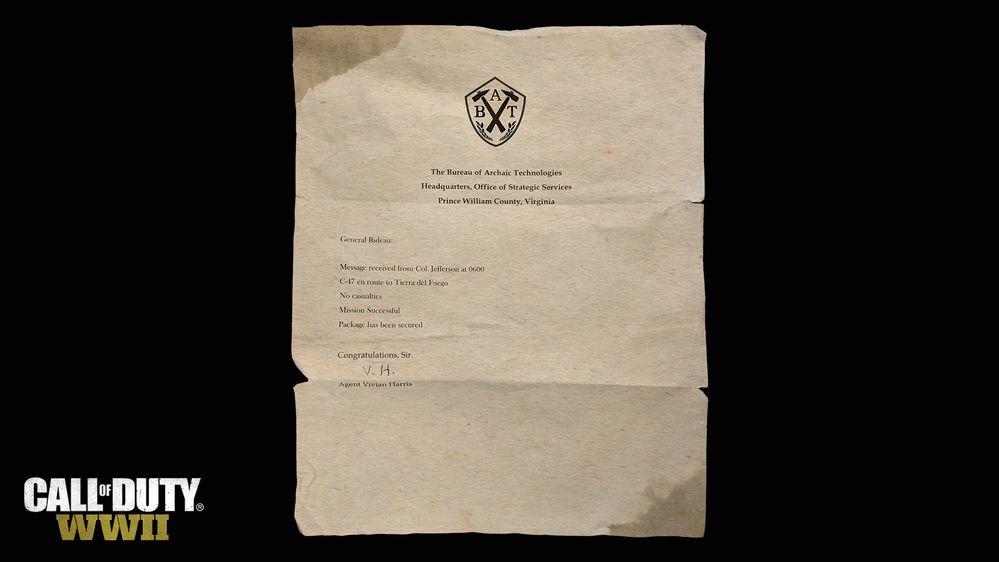 A letter from B.A.T

Nazi Zombies: The Tortured Path Tips. Many of you have been having problems playing The Tortured Path sequentially in Custom. It is possible, it is just a little too difficult to figure out completely on your own. So, here’s a helpful hint: you CAN do the path linearly and beat the Easter Egg in Custom to unlock the final scene and the Survival Maps. In order to do this, complete each map and Easter Egg and then use the Lobby Map Select to choose the next Tortured Path map. Once you have completed each map sequentially, without failing, you will be rewarded with the End Scene and the Survival Maps.

Hot Fix. We pushed out a hot fix for players receiving a Zombie Consumables Supply Drop instead of a Zombies Rare Supply Drop upon completing The Tortured Path, going forward. If you were affected, please contact Activision Support on Twitter, and they can take care of you.