Professional Call of Duty player Jordan ‘Reedy’ Reed has hit out at MLG and the CWL format in a series of tweets, after failing to qualify for the CWL Pro League.

Reedy and his team, playing under The Imperial, placed 6th in their group, missing out on the chance of qualifying for the 2018 CWL Pro League.

It was a close call, as both The Imperial and 5th placed team Movistar Riders finished with a 2-4 record, but the Spanish side took the spot thanks to their head-to-head record vs The Imperial.

Following his team’s elimination from the qualifier, Reedy took to social media to express his discontent with the format, even calling one of the qualified teams, Midnight Esports, “shitters”.

Because there is only one stage of the Pro League this year, there are no second chances for many of these players, whose competitive options are now limited to the open events and qualifying for the world championship.

Reedy feels that despite the five day LAN qualifier, it still isn’t as robust a system as he would like. 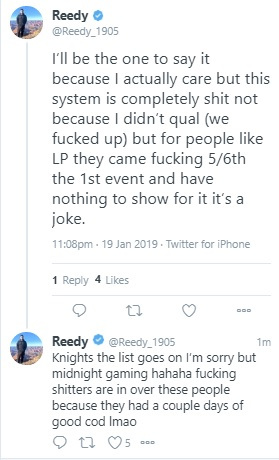 His shot at Midnight Esports surprised many, considering the North American side steamrolled their group with a 6-0 record and 18-6 map count, beating some top teams along the way.

Midnight player Dylan ‘Envoy’ Hannon didn’t take kindly to Reedy’s insult, and hit back, saying “we could have beat your team with our hands tied behind our back.”

we could have beat your team with our hands tied behind our backs, lmao.

Update, 10:50AM EST: Reedy’s organization, The Imperial, have publicly stated that they do not condone the Tweets which are circulating, stating it is “not in line with The Imperial’s standards or morals.”

We are aware of the tweets circulating around.

We would just like to say that we condone any behaviour like that and it does not stand in line with The Imperial's standards or morals.

The support our fans have shown us this event has been appreciated.

Update, 3:30PM EST: Reedy has now apologized for his comments and deleted his original Tweets. He states that he will make a YouTube video to clarify his thoughts.

Former professional player turned analyst at MLG, Jonathan ‘Pacman’ Tucker, also disagreed strongly with Reedy, saying this was the best system for qualification that had ever been in place.

No system is perfect. This is the best qualification system that MLG has ever done. LP didn’t win a series. No way you think that is the fault of the system

Reedy wasn’t done either, as he closed his rant by suggesting that the Midnight Esports players wouldn’t still be playing in the league in two months time.

Who wants to put a bet on, that all of them mightnight players aren’t playing in the league in 2 months lmao.

The format for qualification has generally been well received by other players and by the fans, although having only one stage for the Pro League does leave any teams that miss out feeling hopeless for the rest of the season.