Now a two time world champion, Patrick “ACHES” Price sparked discussion once again around the potential for 5 man teams in competitive play for Black Ops 4, after he explained why he is against the proposal.

Since it’s inception, even as far back as CoD4 promod, Call of Duty esports has always been a 4v4 experience, but some are wondering if that could be about to change.

In past games, public matches have typically been 6v6 (with ground war playlists increasing to 9v9), but Black Ops 4 has cut this down to 5v5 for the first time.

That means standard, public match modes such as TDM, Domination, Search & Destroy and so on, will be played 5v5 by default. There is a ‘Chaos’ playlist, which supports 6v6, non-objective modes like TDM and Kill Confirmed.

The game has been designed ground up for 5v5, from the maps, to the specialist picks. Dan Bunting, co-studio head at Treyarch, explained that they wanted to slow things down just slightly to promote more meaningful decisions, tactical play and communication.

But of course, competitive play already does all of these things, primarily because it is 4v4. The argument for moving to 5v5 largely centers around making it more appealing to casual players, by making less separation between public matches and competitive matches.

Evil Geniuses’ ACHES however, thinks this is a naive hope at best. He also explains that thinking 5v5 will mean more opportunities for amateur players is ‘delusional’.

Other top professional players were largely in agreement with ACHES too.

Team Envy’s Martin “Chino” Chino explained that the competition would become heavily one sided, with power rosters forming, and other teams being left with lesser options.

European players, and Splyce coach Mark “MarkyB” Bryceland, were completely in agreement however on the issue of where the best talent would end up.

MarkyB, although he would prefer 4v4, does reckon that more talent could be found from lower down the levels, if 5v5 was brought in.

Red Reserve’s Rhys “Rated” Price however, thinks that the European scene particularly would be effected negatively by such a change. 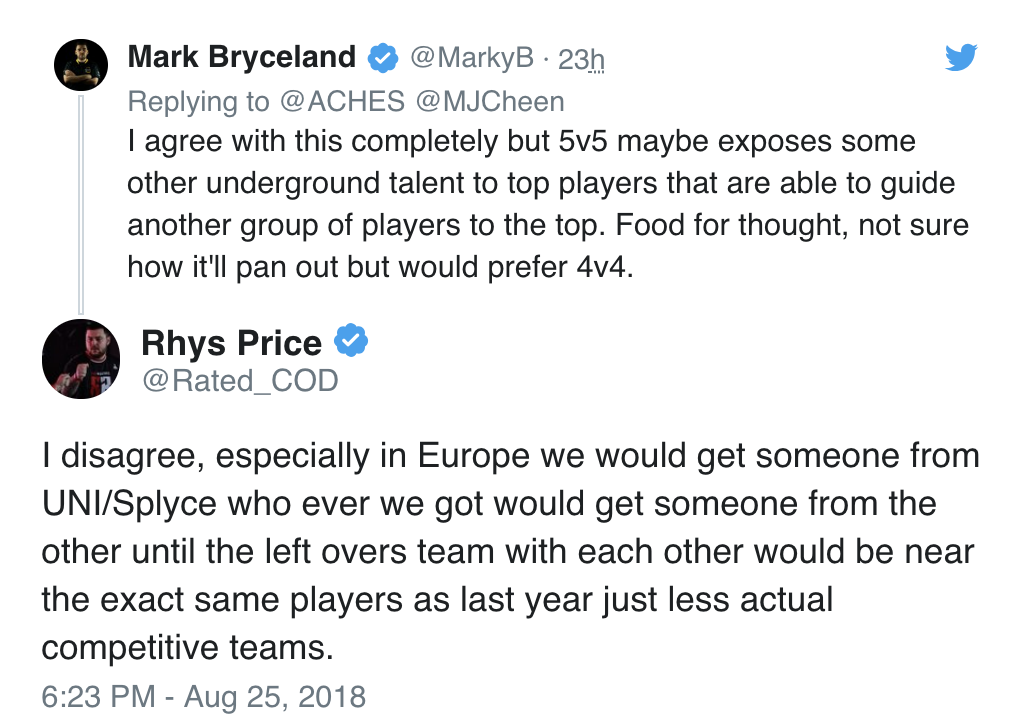 Former professional player turned caster and analyst, Anthony “NAMELESS” Wheeler also had his say, and was more optimistic about a change to 5v5.

He says “both sides can be argued”, and that 5v5 wouldn’t necessarily spoil the aspirations of upcoming players.

FaZe Clan’s Tommy “ZooMaa” Paparatto didn’t give his view one way or the other, but rather simply wants to know sooner rather than later if a change is coming.

CompLexity Gaming’s Doug “Censor” Martin has made his opinion very clear, but doesn’t go into any details as to why he doesn’t want 5v5.

Currently, there is nothing official whatsoever that competitive will switch to 5v5, and considering Black Ops 4 is just over a month away from release, it does seem like too drastic a change to make at this point.

The CWL and esports reveal will take place from Treyarch’s studio on September 19, shortly after the Blackout Battle Royale beta.

There are also murmurs of possible esports plans for Blackout itself, considering the burgeoning battle royale competitive scene with the likes of PUBG and Fortnite.