The golden camouflage in Modern Warfare appears to be the cause of a ridiculous visual bug that obscures your vision in direct sunlight.

Typically a way to highlight your prowess with a certain weapon type, golden camo is one of the more difficult unlocks throughout any Call of Duty title and Infinity Ward’s Modern Warfare is no different. The latest iteration, however, seems to be the cause of much frustration due to a ridiculous visual bug.

Weapon camouflages are a huge drawing point for a number of Call of Duty players as those dedicated enough are able to flex their accomplishments to others in-game.

Golden camo is often one of the few high-tier unlocks in any given Call of Duty title. However, in Modern Warfare, the weapon skin appears to be extraordinarily distracting in certain situations when the lighting hits just right. 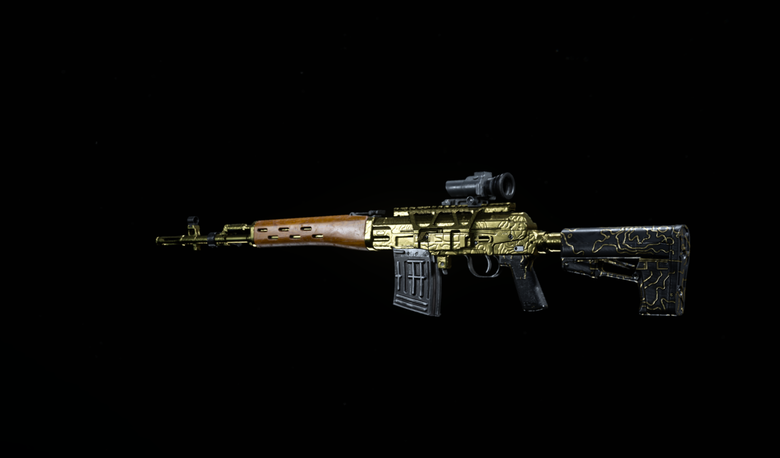 An example of the golden camo equipped on a Dragunov sniper rifle.

As exemplified in a November 25 post from Reddit user ‘cyberself19,’ the most recent form of golden camouflage actually does more harm than good as the overwhelming glare takes up half of the screen while aiming down the sights.

The weapon tint isn’t always so painfully bright, but when met with a direct source of light, the glare becomes absurdly over-the-top.

When in the middle of a sunlit street for instance, or simply just aiming through an open window, golden camo seems like a surefire way to paint a giant target on your character model.

Not only does the distracting reflection take up a considerable chunk of screen space, but it can also entirely block enemies from appearing in your line of sight.

Supposedly the issue stems from a setting that can only be adjusted on the PC version of the First Person Shooter.

As Reddit user ‘Nowherelair’ explained, turning “screen space reflections off” will reduce the impact of the ridiculous glare. Unfortunately for console players however, the PlayStation 4 and Xbox One versions of Modern Warfare feature no such option to toggle on and off.

This means that the golden camouflage is going to be a distraction and the cause of much frustration on console until a widespread patch is implemented to either reduce the shine or implement the setting for non-PC players.

Similar to the Dark Matter camo in Black Ops 4, the Damascus skin is unlocked when all other golden weapon challenges have been completed.

In order to earn the golden camouflage in Modern Warfare, players must first complete every single camo challenge for a particular weapon. From long-ranged eliminations to multi-kill medals, each weapon class offers a unique slate of tests to complete before unlocking the golden variant.

While there’s no telling if this visual issue impacts each and every weapon with a golden camouflage variant, there’s no denying that such an egregious visual bug could prove to be a major deterrence for some players. Especially those looking to go the distance and grind out the platinum and Damascus camos.