An Art Director at Infinity Ward has revealed that a new master camo – higher even than Damascus – will be coming to Modern Warfare at the “end of this month or early next,” and fans are already getting excited.

Most Call of Duty games in recent years have had a mastery camo unlocked for completing every single camo challenge, ranging from Dark Matter in Black Ops 3 and 4, and this year’s Damascus iteration.

It’s an achievement that the most serious players will spend hours grinding for, and take pride in donning on their weapons to prove that they are a talented player. Now, though, it appears players have got to grind a little more, with a new master camo on its way.

The Damascus camo is currently the highest-tier unlockable cosmetic.

After teasing a “very special new skin” coming to the game earlier in February, ArtPeasant, real name Joel Emslie, has now confirmed that the “new master camo” will be coming “end of this month or early next.”

The comment was posted to Reddit on March 5, so we imagine the new as-yet-unnamed master camo will be arriving at the start of April at the very latest.

Emslie also confirmed that the new camo will be unlocked through achievement, so there’s no need to worry about having to drop money on CoD points or in the store: it’s entirely down to your own ability and willingness to push for the next tier. 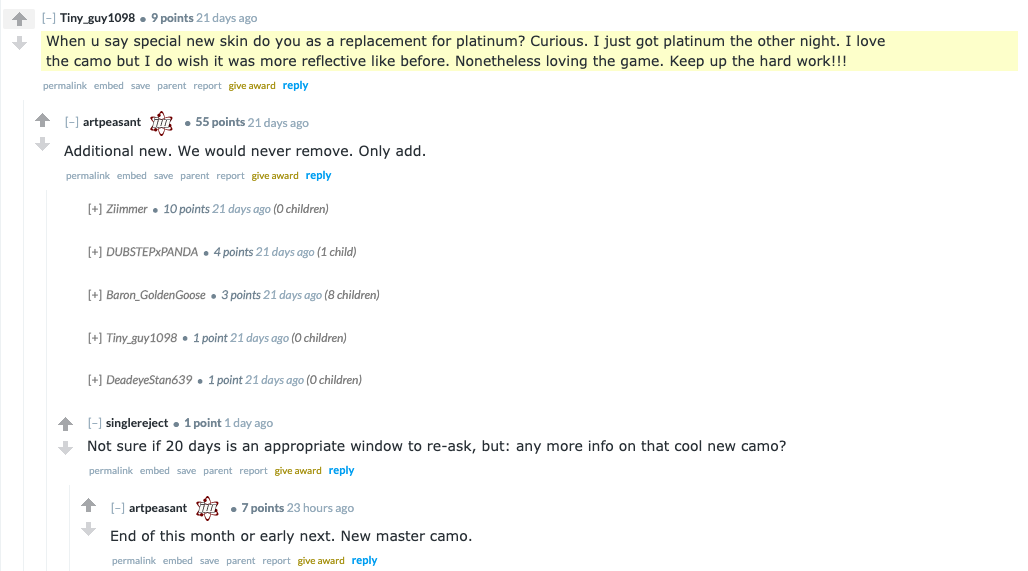 It was also confirmed that this camo will not be replacing Damascus or any other camo, saying that they will “never remove, only add” to the pool of camos and cosmetics in the game.

What exactly the camo will look like or how it’s earned isn’t yet known, but based on this comment we can probably except more information sooner rather than later.

At launch, the Damascus camo was bugged and unable to be unlocked, so Infinity Ward will be hoping not to have any issues with this new camo when it finally drops.