Call of Duty: Black Ops 4 players who are subscribed to Twitch’s Prime subscription service are in for a treat, as an exclusive bundle of cosmetics has just been released and is now available for free.

On March 27. Twitch announced that they have partnered up with CoD publishers Activision to release a exclusive cosmetic bundle to all those who have a Twitch Prime subscription.

It’s worth pointing out that this Twitch Prime bundle is currently only available on the PlayStation 4 console, as per Sony’s exclusivity agreement with Activision, so Xbox One and PC players should expect to receive it next week.

What is included in the Twitch Prime Black Ops 4 bundle?

The customization bundles includes a weapon camo, rare outfit skin, and a specially designed skin for the wingsuit and parachute that players use in the Blackout battle royale mode.

As for the design, the weapon camo and outfit have a purple/violet color scheme with a camouflage pattern, while the wingsuit/parachute skin has cartoon versions of certain specialists over a violet background. 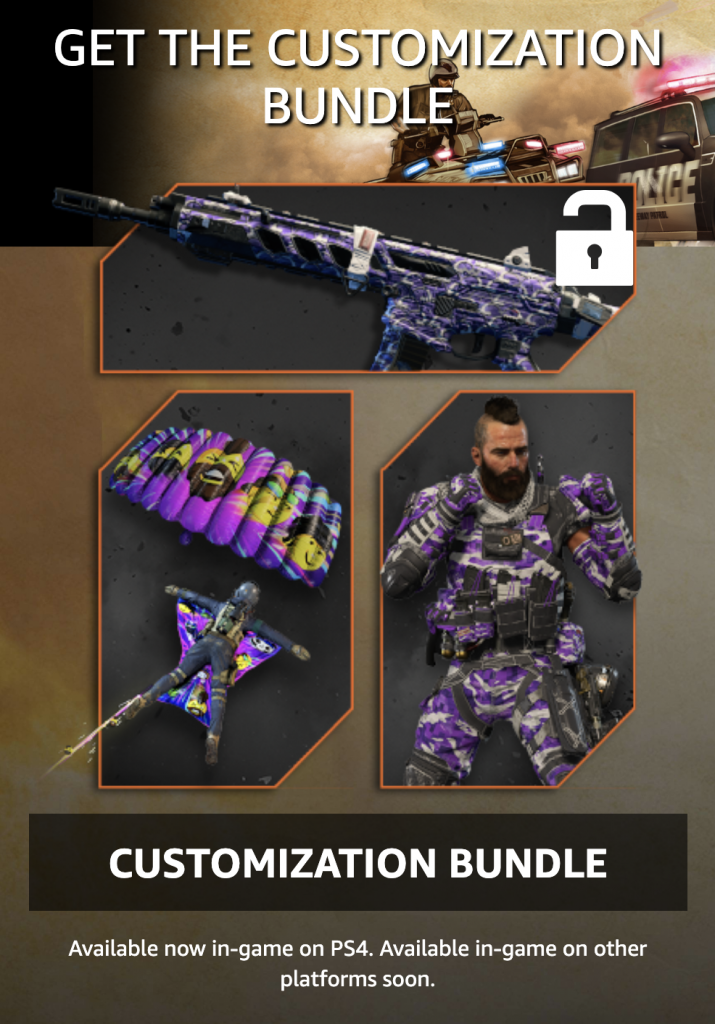 How to redeem the Twitch Prime Black Ops 4 bundle

If you have an active Twitch Prime subscription, all you need to do is visit dedicated webpage for this promo and log in with your Twitch credentials.

Once you’re logged in, simply click the “Claim Now” button and then click “Link account to use loot,” after which you will need to link your Call of Duty and Twitch accounts so that the free content will appear in your game.

If you do not have an active Twitch Prime subscription, you can still get your Black Ops 4 customization bundle for free by signing up to a 30-day free trial of Amazon Prime, which includes Twitch Prime.

To do this, simply visit the promo page and find the light blue “Start Your 30-Day Free Trial to Claim Now” button (shown below) and start the process of setting up your free trial.

Once that is done, you then have to come back to the promo page and click the “Claim Now” and link your Call of Duty and Twitch accounts to receive your free content.

Fortunately, this Black Ops 4 bundle is permanent, meaning you will not lose it if you decide not to renew your Twitch Prime subscription.

If you do not have an active Twitch Prime subscription, you can start a 30-day free trial and claim your Black Ops 4 bundle.
https://twitch.amazon.com/prime/loot/blackops4?reftag=SM_OM_COD191_CRWN

According to the promotion details, this customization bundle will not be the only free Black Ops 4 content made available to Twitch Prime subscribers, as more loot bundles will be released in April and May.