Retailer EBGames has posted a new description of Call of Duty: Black Ops 4 on their website that hints at an unannounced feature coming to the battle royale-style Blackout mode.

Blackout was already confirmed to feature characters and weapons from the Black Ops Zombies universe, but players may actually see the undead themselves on the map as well.

As spotted by reddit user Coldmonkey67, the EBGames listing for Black Ops 4 contained a new description of Blackout. 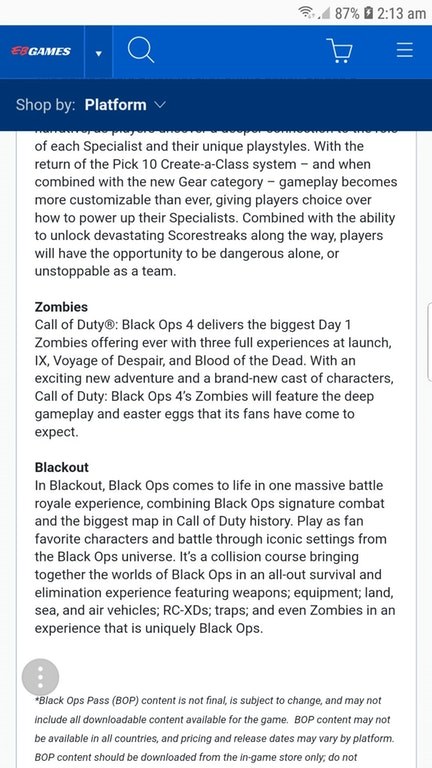 The wording of the description is what is causing speculation, since Zombies is listed near other ingame items – not characters.

Will zombies be an item that can be used to give players an advantage, or was that just an awkward phrasing of already known information?

Although Black Ops 4 had one of the biggest information reveals in Call of Duty history for multiplayer and Zombies, the all-new Blackout mode was kept mysterious.

Player count, map size and other gameplay elements are being kept hidden and the Blackout beta will be seperate from the multiplayer beta.

The Blackout mode is a battle royale experience that will be Call of Duty’s answer to PUBG and Fortnite. The mode will be first person and weapons from all four installments of the Black Ops franchise will be available to find.

In addition, the map will feature sections of fan-favorite Call of Duty maps.

More information will be revealed when the Blackout beta arrives in September, before Black Ops 4 launches in October.