Call of Duty publishers Activision appear to be cracking down on cheaters by targeting websites that offer aimbots and wallhacks for Modern Warfare and Warzone.

With almost any online multiplayer game, such as Warzone, there are always a small section of players who look to get ahead by gaining an unfair advantage, with the likes of aimbots and wallhacks.

While the player base at large has criticized Activision over the volume of hackers in Modern Warfare, they have taken action, reportedly suing one of the top websites where players can purchase these cheats.

Players have called for Activision to address the cheating issue in Warzone and Modern Warfare.

Although a number of ban waves have been issued in Warzone, plenty of players and even top streamers such as shroud have still criticized the state of Warzone after encountering blatant hackers in the game.

Following Infinity Ward’s statement addressing the cheating problem, a major action has been taken with one cheating website (which will not be named to avoid inadvertent promotion), after u/MrTheRevertz- shared screenshots of the website’s Discord announcement.

“Activision Publishing Inc has filed a lawsuit against the website and has made it clear to us that our services violate their Terms of Use,” they revealed. 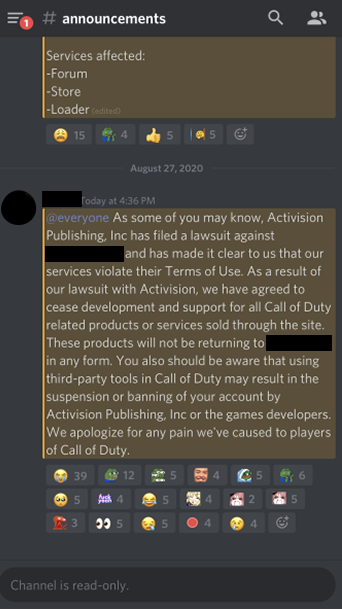 They added that the lawsuit had caused them to agree to stop developing selling these cheats for Modern Warfare and Warzone on their site.

“As a result of our lawsuit with Activision we have agreed to cease development and support for all Call of Duty related products or services sold through the site.”

The cheat developers followed up, claiming that the products will not be made available in any form and warned their users that they may receive suspensions or bans from Infinity Ward or Activision if they continue using the cheats.

Users on the website’s public forum were angry, complaining that they had paid for access to the cheats that were now not working. Some were hoping they would get a refund.

The website still currently offers hacks for other games, including Apex Legends and PUBG.

Along with targeting the websites, Infinity Ward had recently confirmed that more in-game ban waves are on the way with future Modern Warfare and Warzone updates.

How to scroll through TikTok hands-free on iPhone