The launch of Apex Legends Fortune’s Favor means new map changes are coming to Kings Canyon – including the removal of fan-favorite point of interest, Skull Town.

Respawn Entertainment’s developers are moving the story along in Apex. With Loba was officially introduced in the Season 5 launch, but she emerged out of the rubble that used to be Skull Town.

The events of Season 5 will reveal more about how Loba fits in the overall scheme of the Apex Games, and there are already a few updates to the map that will bring new ways to interact with the battlefield.

Out of the blast seen in the trailer and overall construction around the map, new locations are taking over in Fortune’s Favor that the devs hope will encourage players to find new viable loot paths.

To accomplish that, areas of the Season 4 map that didn’t have much traffic will now have opportunities to acquire high-tier loot or at least enough to justify it as a route to take for a map rotation. All of these changes will be supplemented by the new Charge Towers as well as any other secret Respawn might have buried on the new map.

The Broken Coast will have multiple layers of the map for players to explore.

Replacing the deadly shacks of Skull Town and the high-octane action of the Thunderdome will be the new Broken Coastline that runs along Octane’s Gauntlet down to the Water Treatment location.

Within the Coast, new points of interest such as Salvage and a “remnant of the underground network Loba snuck through” will be available for people to explore.

Salvage will be a high-tier loot location with a brand new two-way zipline balloon for faster rotations, so expect to see a lot of teams contest this place in the early moments of a match. 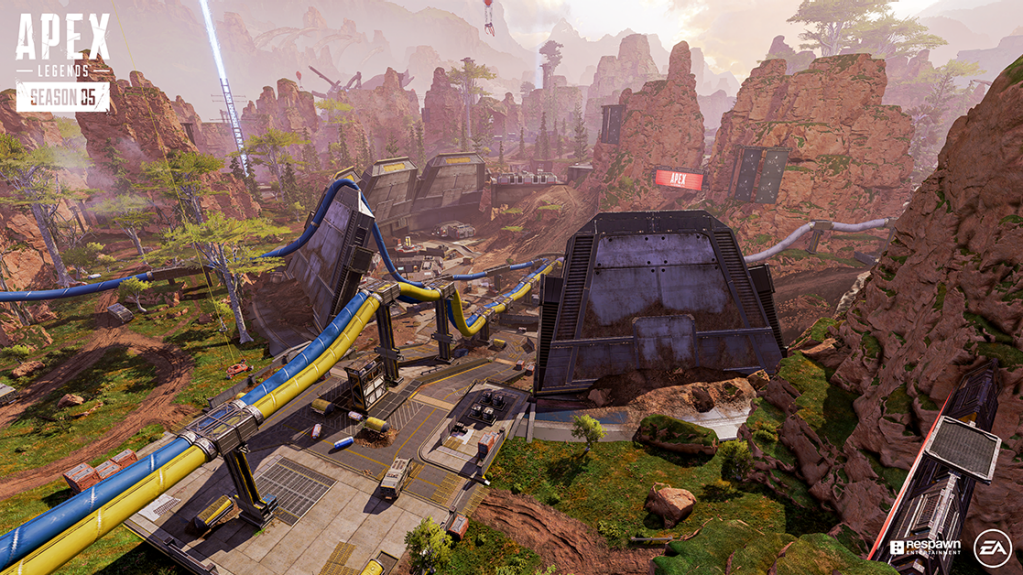 The Rig will be a risky jump for teams, but it could pay out hefty rewards.

The northeast part of the map will also be getting plenty of action, an intentional effect that Respawn wanted to make with the new zone of locations. Replacing the Relay and Wetland areas, the Rig will connect the broken Relay, Capacitor, and Swamps locations for immense pathing options if players so choose.

For teams that favor high risk for high rewards, the north side of the Offshore Rig will undoubtedly be far from the opening circles, but it will have high-tier loot for players feeling lucky. As far as the Capacitor goes, Respawn have added a ton of looting spots and new camps along the lower elevation of the point of interest.

Changes around the map will give Apex Legends players more pathing options.

The idea here was to expand reliable options for players to choose from when it comes to restocking their loot while rotating across the map.

Singh Labs will be getting updates in Apex Legends Season 5.

Meanwhile, the Shattered Forest from the original Kings Canyon is thriving. Now known as the Reclaimed Forest, this area will add a bit verticality for teams looking to safely rotate.

The exterior of Singh Labs around the forest have also been expanded, primarily to make it a “viable landing spot on its own,” according to the devs.

Like the Weapon Racks of Season 4 that guaranteed a starting weapon, the new Charge Towers will be able to give anyone caught in its blast a fully restored Ultimate ability.

Charge Towers offer huge dividends that sits on top of a small platform to claim them.

Interacting with these machines will instantly recharge a Legend’s Ult, which is sure to turn the areas where they’re located into hot zones.

Each Charge Tower is surrounded by eight spires at the corner of its platform. Players will have to fight to claim their spot in that area to get the effects of the node. The new devices will be indicated by glowing yellow towers on the map, and are sure to attract a ton of teams looking for a fight.

Though they didn’t outright reveal anything, Respawn alluded to small updates around the map that “will take a little more digging” to find. This might be a clue that something new has been added in the depths of Singh Labs or similar locations.

Season 5 will have extensive changes for old and new players to explore and discover now that the Fortune’s Favor update reshaped the Apex Legends map.