Apex Legends Lifeline buffs that might be enough to satisfy players

Retooling Lifeline’s abilities in Apex Legends has been a popular topic among players, especially when proposed buffs would help her become the game’s primary healer once more.

The Fortune’s Favor Season 5 update left Lifeline a little worse for wear since the changes she received weren’t that impactful, while other Legends got much-needed improvements.

This means that while the Combat Medic wasn’t changed in a significant way, others have caught up to her to the point where Lifeline’s effectiveness on a team isn’t as apparent anymore, or even necessary.

“Since Lifeline’s being outclassed recently, I brought together some concepts that I saw a while back,” Reddit user ‘SamBuzzz’ said. “I think she needs a buff since she’s the only dedicated medic in the game, but other Legends can still provide medical support more efficiently than her.” 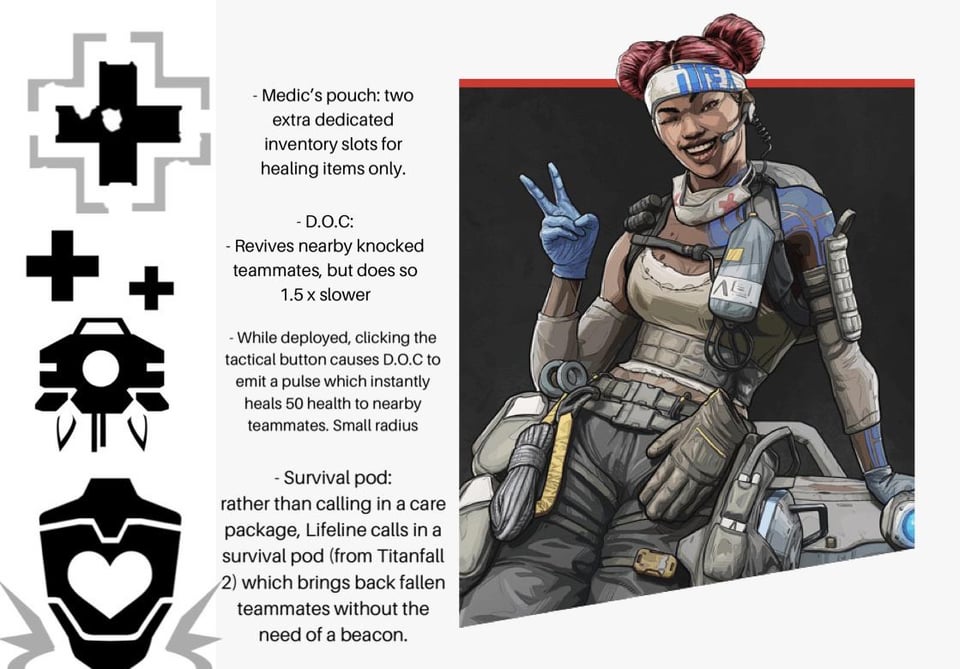 That would already give her something far more unique than what she is currently equipped with. To reiterate, her Combat Medic passive currently in the game is great, but buffs to other Legends like Gibraltar, who can provide full 360-degree protection while quickly reviving, makes Lifeline less appealing.

SamBuzzz also took into account the D.O.C. Heal Drone and gave it an incredible alteration that would let it actually revive a downed teammate at 1.5x the regular speed.

This would be essential and arguably more effective at protecting a person being revived than what the drone can currently do. As for healing, reactivating the tactical ability while D.O.C. is out will give a short pulse that instantly heals 50 HP to nearby teammates.

Lifeline isn’t touting the most impressive healing at the turn of Season 5.

As for her Ultimate, it would change from a Care Package to a Survival Pod akin to the ones in Titanfall 2. These pods would house as a fallen teammate, bringing them back to the fray instead of having to look for a Respawn Beacon.

The retooled ability kit would completely open up how a team can strategize with a Lifeline since it gives her more dynamic heals in case someone gets downed or killed.

Though the Respawn devs don’t think Lifeline needs a buff in Season 5, this could be a great chance for the studio to reinvent one of the traditionally popular picks in the battle royale.