Numerous leaked images have revealed a new potential expansion for World of Warcraft titled ‘Shadowlands’. This would be the seventh WoW expansion, and the first big release for retail WoW since Classic launched.

The release of World of Warcraft Classic brought lots of attention to the legendary MMORPG, while also attracting plenty of new and old players to its old school servers.

But while the future of Classic is still in question, as are the methods for how Blizzard plans to roll out Classic content, the WoW dev team hasn’t forgotten about the current retail version of the game, and new leaks have indicated that a new expansion is on its way soon.

Leaked images have revealed merch, concept art, logos, and advertisements for World of Warcraft Shadowlands. Fans are anticipating that this will be the latest expansion for WoW, and that details will be revealed at BlizzCon in November.

In the leaked image showcasing Shadowlands themed merchandise, there’s a render of Lich King Bolvar Fordragon, who took on the mantle of Lich King after the previous king, Arthas Menethil, was slain.

Fans quickly pointed out that the image could be fake because his eyes are blue instead of fiery red, but lore enthusiasts backed up the idea that he’s had the Lich King’s helm on so long that it’s taken over. Or, as reddit user ant0szek remarked, he could have just re-specialized to frost.

Another leak surfaced that appears to be some sort of advertisement, inviting players to “enter the Shadowlands”. In the game, the Shadowlands is the world the character sees when they have died and have yet to revive. The image reads: 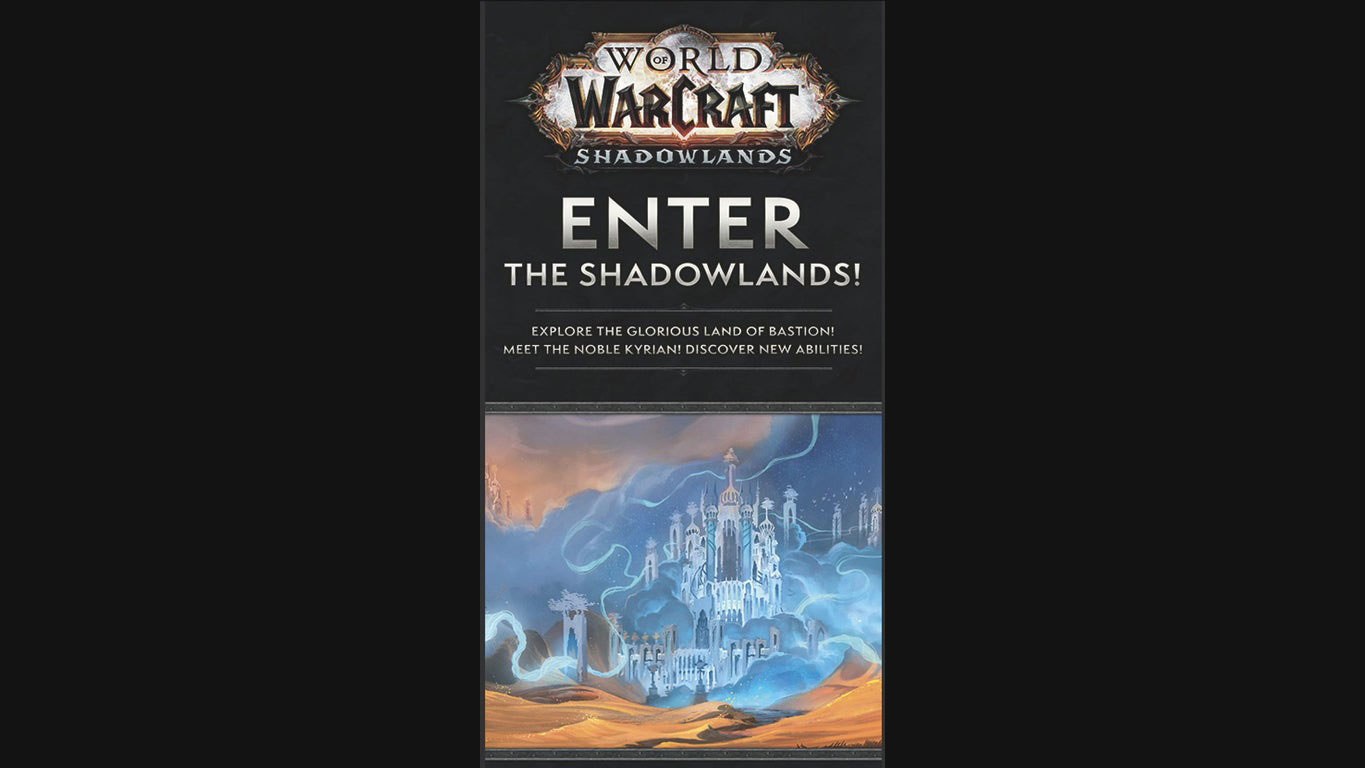 The image prominently shows the presumed logo for the upcoming expansion, with a stark black and white design, that resembles the colorless black-and-white imagery of the in-game Shadowlands that a player sees when they die.

There’s also a mystical, ghostly blue magical castle that’s surrounded by rolling yellow-orange plains. According to some fans on reddit, this castle’s aesthetic matches that of the Sylverian Dreamer mount added to the store during the previous expansion, Battle for Azeroth.

This follows a pattern referred to as the “store mount theory” that’s based on the idea that store mounts are introduced an expansion prior to the one they can be found regularly.

At the end of the day, all that’s been released so far are unconfirmed leaks, and there’s been no official comment, only speculation. But if this BlizzCon is to be as epic as Blizzard expects and needs to be, then a new expansion would be perfect for pleasing its WoW audience.