Bugs in PUBG have been well documented since the battle royale game came to fame. However, perhaps the biggest bug to date has been recently discovered!

Disappearing loot boxes and flying cars are one thing but shooting being completely broken is another. News has surfaced, first reported by GamingIntel, that the fire rate of guns in PUBG depends on the frames per second (FPS).

If this is true, which it appears to be, this is a huge revelation. Essentially this means the same two guns can have wildly different effectiveness. YouTuber WackyJacky101, whose video is embedded below, first highlighted the problem. Reddit user, MutuTutu, then found some further findings which are shown in the embedded post further down.

Initially, the conclusion was drawn that low FPS would decrease the rate of fire. This is true to a degree, and while less recoil helps, the reduction in fire rate would actually have a negative effect in a gun battle.

Further analysis discovered that fire rate, and therefore recoil, is actually determined by how well the gun you’re using links up with your FPS.

The best way to explain this is probably with the AKM. The common assault rifle fires 10 shots per second. This means with PUBG playing at 30 FPS there will be a shot every three frames. Consequently, with this particular frame rate, the gun would work as intended.

The overall consequence of this is guns being fractionally as effective as they were designed to be. At lower frame rates, guns, at worst, can be only 75% effective. This might not sound devastating but when you consider that sometimes, literally thousandths of a second are the difference between winning and losing a gunfight, then this is astounding.

The effect on PC at higher frame rates isn’t as significant. Nevertheless, in the context of competitive shooters, especially at a professional level, it is once again an incredible revelation. At frame rates of 90+ FPS the lower-end of effectiveness is 90%.

Unfortunately, as guns have lots of different fire rates then this issue is always going to be prevalent. This issue as a whole raises several questions about the legitimacy of PUBG gameplay at both an amateur and competitive level.

Actual reason behind WackyJacky’s newest find and how to increase DPS! from r/CompetitivePUBG

At this point, PUBG becoming an e-sport on console, or even a triple A level game, is fantasy. Rendering issues and frame rate drops have plagued PUBG on both Xbox and PS4. It should be noted that the PS4 appears to be more stable at 30 FPS than the Xbox.

The above issues hold truer to the console ports of the game. This is because where PUBG on console runs at a lower frame rate, there is a greater likelihood of missed shots (in terms of syncing with the frame rate). As a result it is reasonable to say that, for the most part, the gun balance isn’t working as intended. Interestingly, where the AKM operates on a round number, this is probably the most effective gun for console.

The PC version of PUBG is naturally more forgiving. Far superior hardware allows the game to run, at often, in excess of 100 frames. This diminishes the issue somewhat.

Hardcore PUBG players have even discussed this to the point whereby an optimum frame rate for each gun has been calculated. This can be achieved by having FPS locked at a certain amount. This isn’t possible on console as the FPS settings are fixed by the game. 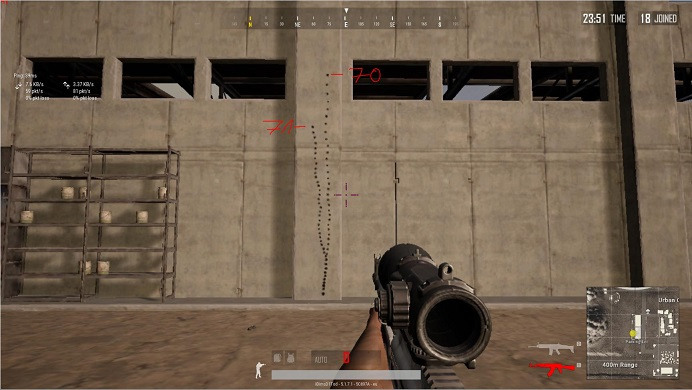 The bullet marks highlight the difference in damage and recoil… (Image from: u/MutuTutu)

The biggest question to come from this is the legitimacy of PUBG e-sports. Numerous events have been held with some of the best gamers in the world. It’s fair to say this issue would have had an effect on these competitions.

However, there is more to the issue than just the hardware and the settings. For example, if one player is experiencing a frame rate drop, then the issue becomes apparent again. In this situation two players with the same guns could have very different damage per second (DPS).

A frame rate drop for one player, and not the other, could come as a result of facing a resource intensive part of the map, such as a city. Conversely, the opposing player might be looking at open ground and therefore doesn’t experience the frame drops.

In this scenario, the player with the “more correct” frame rate for the gun will fire more shots.

To summarize this issue could very well have altered the results of not only thousands of public PUBG matches but e-sport competitions also.

Given PUBG is arguably coming to the end of its life cycle with the introduction of new battle royale games such as Call of Duty Blackout and Apex Legends, then this news may not get the attention it should.

Make no mistake about it this is an incredible revelation which should be getting more attention than it is.